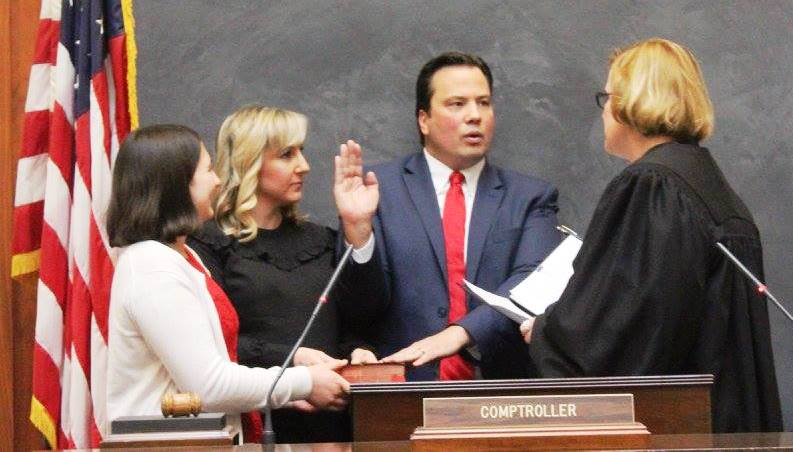 Erie County Comptroller Stefan Iwan Mychajliw is the son of Polish and Ukrainian immigrants, the youngest of seven children, who grew up in blue-collar beginnings near the corner of William and Fillmore on the East Side of Buffalo.

Comptroller Mychajliw’s father and paternal grandparents were born in Ukraine and came to America in 1965.  They settled in the Broadway-Fillmore section of the city.  The nucleus of the neighborhood was the Broadway Market and numerous Catholic churches, including Saint Nicholas Ukrainian Catholic Church at the corner of Fillmore and Oneida where Mychajliw was baptized.

His Great Uncle Frederic “Fritz” Garwol beamed with pride when sharing the family legend of Mychajliw’s Polish Great Grandfather on the maternal side of the family (Bogdan) being the “village strongman” that traveled to numerous villages near the Carpathian Mountains.

While attending Buffalo Public School Bilingual Academy #33 and the Buffalo Academy for Visual and Performing Arts High School, Mychajliw spent his youth at the Babcock Boys and Girls Club and Seneca-Babcock Community Center.

Erie County’s “independent watchdog” has a lengthy career protecting taxpayers following his education at Syracuse University, in his role as an investigative journalist at WKBW-TV and WGRZ-TV in Buffalo.

To lead by example Comptroller Mychajliw’s first hard hitting review was of his own department: the Office of Erie County Comptroller.  The top to bottom review revealed troubling inefficiencies.  Numerous reforms were implemented to clean up the department, and a CPA was hired to lead the Audit Division for the first time since 1986.

The people of Erie County first elected 46-year-old Stefan I. Mychajliw Erie County Comptroller on November 6th, 2012 to complete the remaining year left on a vacated term.  Comptroller Mychajliw won re-election to a full four-year terms on November 5th, 2013 and November 7th, 2017. He and his wife, Ashley, a social worker, make their home in the Village of Hamburg. He is the proud father of Mia Theresa Mychajliw, 14, a student at Cleve Hill, and Maksym Roman Mychajliw, 2, and Emeryk Francis Mychajliw, 1.

Very involved with Infant of Prague Roman Catholic Church in Cheektowaga, Comptroller Mychajliw is a Church Lector and bingo caller. He is also active in Collins Christian Ministries and Keryx Prison Ministries at Collins and Gowanda Correctional Facilities.

You can email the Comptroller at comptroller@erie.gov.