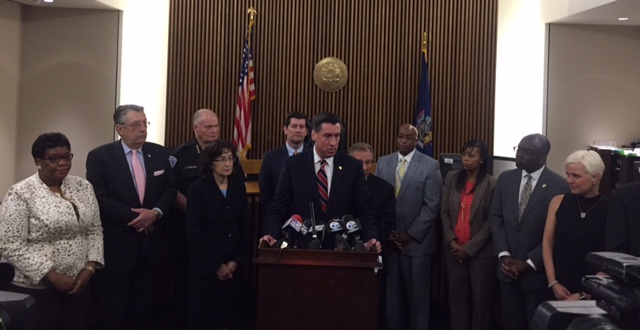 The new court, under the judicial supervision of Judge Craig D. Hannah, began on May 1 and works in conjunction with Drug Court, which was established in 1995 by Buffalo City Court with Judge Robert T. Russell, Jr. in response to the crack cocaine epidemic.

“We were finding that opiate addicts who were arrested needed a more immediate and much more significant support system,” says Judge Amodeo. “We couldn’t wait for the traditional court process. Many of these people were dying on us.”

Buffalo is the only city in the country receiving a grant from the U.S. Department of Justice Bureau of Justice Assistance to pilot this program which is being administered by Dr. Richard Blondell of UB Family Medicine, Horizon Health Services and the HOPE Program.

“People with opiate addictions are turning up in our legal system in need of treatment, not jail,” says DA Flynn. “This proactive approach is one way to get help for those who desperately need it and save lives.”

"Buffalo was an outlier in establishing the first Veteran Court and with this federal grant can again demonstrate to the nation how a comprehensive approach that recognizes the root problem and works to help people addicted to opiates find a path to recovery is the optimal outcome," said Congressman Brian Higgins (NY-26).

The Opiate Crisis Intervention Court works like an intensive triage, putting the criminal proceedings on hold for an immediate drug intervention. Within 24 hours of an arrest, everyone in custody is screened for an opiate addiction.  Those affected who have been unsuccessful in previous treatment programs and are detoxing will be referred to inpatient care and those who haven’t used in a few weeks will receive outpatient care and supervision.

“The fight against the opioid epidemic requires all hands on deck and we are pleased that the City of Buffalo and Judge Amodeo are devoting these resources to the effort,” says Erie County Executive Poloncarz. “We need to use every possible tool to stem the tide of opioid abuse and the Opiate Court will be a critical addition.”

“This innovative Opiate Intervention Court program supports my Administration’s ongoing commitment to serving city residents and helping those with substance abuse issues,” says Mayor Brown.  “I thank Buffalo City Court Judge Thomas Amodeo for his dedication to the court system and for spearheading this collaboration that will make a positive impact in people’s lives in Buffalo, providing them with a chance to get the help they need in order to change the direction of their life.  By working together, we will continue to further strengthen families and neighborhoods in Buffalo.”

“The new crisis intervention opioid court will screen for overdose lethality risk and get this group who are at risk of dying into medically managed treatment so that they are stabilized and ready for the court process to begin,” says Dr. Blondell.

“Court intervention is one of the most valuable tools that we have to compel people to the treatment that they need,” says Constantino of Horizon Health Services. “We are grateful to the court for their partnership in this battle and for continuing to take proactive measures that will save lives.”

Since the Opiate Crisis Intervention Court began, dozens of people have been placed in treatment and no lives have been lost.