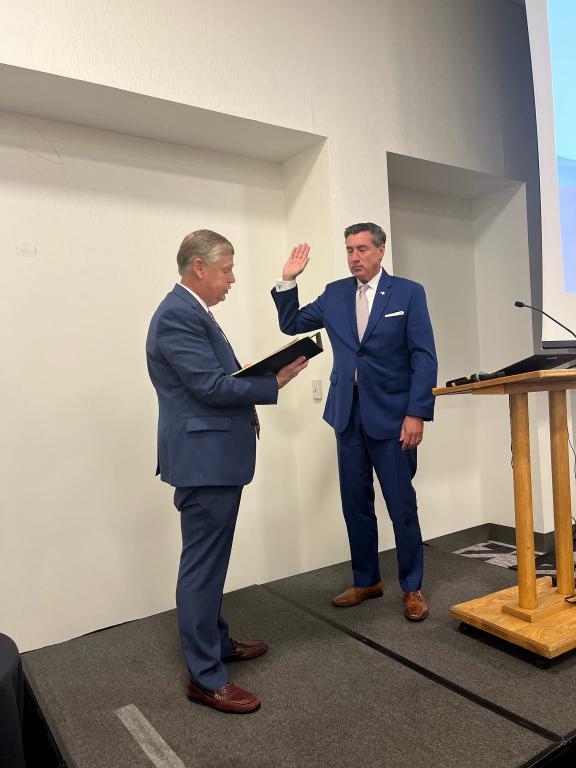 DENVER, COLORADO – Erie County District Attorney John J. Flynn has been elected by his peers to serve as the President of the National District Attorneys Association (NDAA). District Attorney Flynn, who was unanimously voted as President-Elect by NDAA members last summer, was officially named President this afternoon at the “Pass the Gavel” ceremony at the organization’s Summer Summit in Denver, Colorado.

The National District Attorneys Association, established in 1950, is a non-partisan, non-profit association of prosecutors from across our country. The organization provides educational training, technical assistance and other services to members. Their mission is to be voice of our nation’s prosecutors by supporting efforts to protect the rights of the people while providing its members with the knowledge, skills and support to ensure justice for all.

As President of NDAA, DA Flynn will focus on the dual role that prosecutors play in holding bad actors accountable, particularly in light of increases in certain violent crimes across the country, while promoting innovative thinking and smart criminal justice reforms to protect our communities. Additionally, he plans to promote greater leadership and trial advocacy skills training, especially as prosecutors’ offices across the country are experiencing severe recruitment and retention challenges.

“It is my great honor to serve as the leader of this organization. I extend my gratitude to the National District Attorneys Association, not only for their confidence in me to be the representative of this association, but for its commitment to the prosecution profession through advocacy, support, training for our members. I, along with my colleagues across the country, chose to become prosecutors to protect the rights our citizens, create safer communities and ensure that we obtain justice for the victims of crime. I look forward to representing my fellow District Attorneys and the opportunity to have a voice on criminal justice-related issues on a national level,” said Erie County District Attorney John Flynn.

For more information on the National District Attorneys Association: www.ndaa.org