In observance of Black Balloon Day, Erie County District Attorney John Flynn and his office remain committed to fighting the opioid epidemic in Western New York as we mourn those who have died from opioid use. DA Flynn encourages those suffering from addiction to seek treatment, warning that fentanyl-laced drugs have contributed to a significant spike in overdoses throughout Erie County. He also reminds residents that anyone can anonymously provide information to assist his office in the prosecution of drug dealers and our efforts to stop these dangerous substances from continuing to plague our communities. 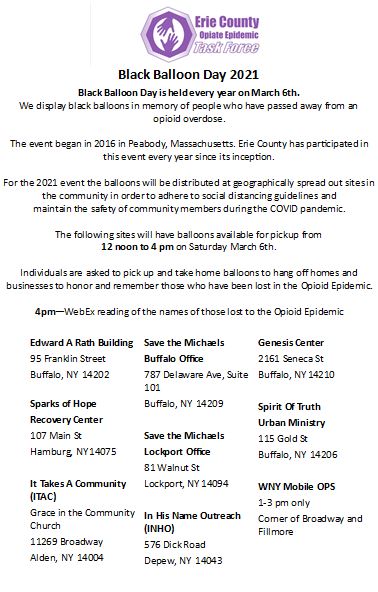 Last week, the Erie County Department of Health announced there have been a total of 232 confirmed opioid-related overdose deaths in 2020 with additional cases pending toxicology reports from the Medical Examiner’s Office. Due to alarming increase in the number of deaths compared to the previous year, DA Flynn encourages anyone with information on suspect drug dealers to come forward.

“It is very important that we help those who suffer from substance use disorder, but it is equally imperative that we prosecute the people who profit from the addiction of others. Fentanyl-laced heroin and cocaine continue to come into Western New York, which has caused a shocking increase in the number of fatal and non-fatal overdoses over the past year. I urge anyone with information on a suspected drug dealer to contact Crime Stoppers, so that my office can investigate and prosecute the criminals who peddle this poison,” said Erie County District Attorney John J. Flynn.

In March 2018, DA Flynn announced a partnership with Crime Stoppers WNY to offer rewards up to $2,500 for information leading to the arrest and/or indictment of opiate dealers in Erie County. The DA’s Office contributed $20,000 in asset forfeiture money to launch the initiative, which allows people to anonymously report information about suspected drug dealers. Crime Stoppers WNY committed an additional $25,000 to the program (http://bit.ly/3kNQdMG). Since the announcement, Crime Stoppers has distributed about $11,000 in rewards for new information that resulted in the arrest of individuals charged with narcotics-related crimes.

The Erie County District Attorney’s Office is a member of the Erie County Opioid Epidemic Task Force. The Task Force recently announced that the annual ceremony for National Black Balloon Day will not be held in-person this year due to the ongoing COVID-19 pandemic. A virtual ceremony will be streamed on March 6, 2021. Those who would like to participate in the annual commemoration are asked to display black balloons in front of their homes and businesses to remember those who have lost their lives to substance use.

For more information on Crime Stoppers WNY and how to anonymously report a tip: www.crimestopperswny.org