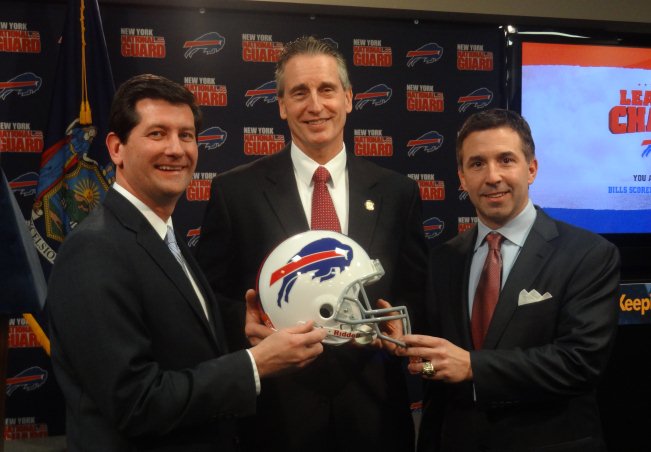 From day one, a top priority of my administration has been to get the right lease negotiated for state and local taxpayers, the Bills, and their fans.

I am proud to say we have accomplished that goal. On behalf of the entire Erie County negotiating team, my thanks to the Bills’ organization and Mr. Wilson and Governor Cuomo and his team for all of their hard work in getting this lease done, and for being here to present this early Christmas gift to Bills fans everywhere.

This new lease ensures that the Bills continue to be a part of our community for the next decade and also prepares for the future of a new stadium to ensure the Bills remain in Buffalo for many years to come.

Everyone understood the economic realities facing our community, and that’s why we have developed a more affordable capital improvements plan to invest $130 million into Ralph Wilson stadium over the next several years, not the more than $200 million originally discussed, and that includes a $35 million investment from the Bills’ organization ($54 million from NYS and $41 million from Erie County).  This funding will go directly towards improving the fan experience at games and includes:

Additionally, the Bills will be showing our community the same loyalty that fans have shown them for over 50 years by agreeing to a binding non-relocation clause.

Lastly, this new agreement establishes a New Stadium Working Group that will consist of representatives of the Bills, the County and the State to explore the potential for the construction of a new stadium in the future, along with a dedicated fund for future development and planning.

The Bills are not just a driver of our regional and bi-national economy but also critical to the framework of our community.