Police find chemicals and other drugs in home

GRAND ISLAND, N.Y. (WIVB) - This story is happening right now on Grand Island. Sheriff's deputies are on the scene of a suspected meth operation.

Here on Baseline Road, across from Jenell Drive, where minutes ago the Erie County Sheriff's office, the hazmat team, and fire department left the scene. They were there for hours.

This involves what they call a "fish tank" meth lab. An unusual thing, there's stuff about it on the Internet. It involves using an aquarium, tin foil, ammonia, and a bunch of other things to make some kind of methamphetamine.

Now police actually arrested the three residences here. They say they had gotten a tip and had been doing surveillance of this home for two or three days before they got a search warrant. They moved in and made three arrests.

Erie County Sheriff's Captain Gregory Savage says this stuff can be dangerous. He explained, "Anytime you mix potentially volatile and corrosive chemicals, which is what we have here. We have ammonia, we've got several different forms of acid, and some other things. And then you apply either heat or any type of an electrical charge to it and there's a potential for a real catastrophe. The houses are very close together and they're small houses. There's certainly potential for a bad situation here."

Once again, three arrests have been made. Their names have not been released. The captain says they also found marijuana inside and cocaine residue as well. 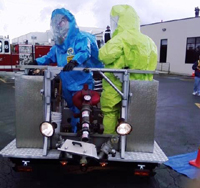 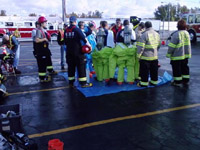 Buffalo, N.Y. – September 26, 2009 – Perry's Ice Cream Co. Inc. in conjunction with the local emergency services, The Akron and Newstead Fire Departments and The Town of Newstead Disaster Coordinator are conducting a training event at their main facility at One Ice Cream Plaza in Akron, N.Y. The drill will be held on Saturday, October 10 from approximately 8 a.m. to 2 p.m.

The purpose of this event is to exercise emergency plans, response procedures and to provide "hands on" technical practice for emergency response agencies. 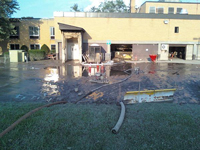 Gowanda, NY – In the aftermath of severe flooding which caused extensive damage to communities in Erie and Cattaruagus counties, the Erie County Hazardous Materials Response Team (EC-HMRT) was called in to support recovery efforts at Tri-County Memorial Hospital. The hospital, which was evacuated in the early stages of the flood event, suffered extensive floodwater damage and was subsequently closed indefinitely. 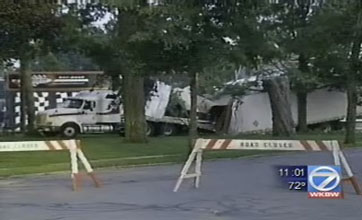 Roads were closed and residents were evacuated within the 500-foot perimeter after the crash of a tractor trailer carrying a flammable alcohol product. The crash occurred around 5:30 p.m., and roads began to open around 10:30 p.m. The tractor trailer carrying the barrels of flammable liquid crashed into the village park the sits between a fork in the road along Broadway in Alden. The driver was taken to ECMC for observation, and Erie County's Hazardous Material Response Team and the DEC were called to verify that the crash did not cause any of the flammable material to leak. The Hazmat Team says 8 or 9 barrels were damaged, but no barrels leaked. Still, crews from various departments were taking every precaution possible to ensure there was no risk of the material catching fire. The DEC carefully removed the damaged barrels, and the drums that were not damaged will be shipped to their original destination. 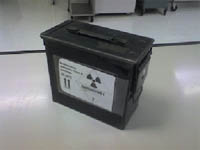 January 7, 2008 - The State Department of Health and Cheektowaga police have yet to find two radioactive canisters that have been missing since Thursday.
That morning, a 2 On Your Side viewer contacted the station to say he drove over some containers that said "Radioactive" on them.
The New York State Health Department says they fell off a truck on Century and Treehaven in Cheektowaga. They were supposed to go to Buffalo's VA Hospital.
The truck is reportedly a supplier of medical materials for several local hospitals. The driver realized he was missing three canisters and re-traced his steps to find them.
A Haz-Mat crew was called in and found one of the containers, but two are still missing. The boxes consist of syringes used in IVs, and radioactive dyes used in diagnostic tests.

Complete story can be found at: http://www.wgrztv.com/news/news_article.aspx?storyid=54138

Jul 30, 2007 An environmental cleanup crew from Norfolk Southern Rail Road continued to clear a chemical leak at its Village of Sloan rail yard late Monday night. The chemical, organic peroxide, was leaking from a tractor trailer. The chemical is highly flammable and explosive, first responders said. The initial call came in just after 4 o'clock Monday afternoon. Firefighters from Sloan Vol. Fire Co., along with the Erie County HazMat Team, were called in to assist. There was concern about the leak, because organic peroxide has a very low flash point, said Sloan Fire Chief Barry Ping. At one point, the temperature inside the tractor trailer was between 125 and 150 degrees. The chemical is extremely flammable above 78 degrees, Ping said.Nearby homes were never evacuated during the process. Ping said residents were never in any danger.
http://www.wkbw.com/news/local/8821567.html

Sep 23, 2006 - South Wales, NY A South Wales man is facing federal drug charges after agents with the Drug Enforcement Administration said they found chemicals in a mobile home that could be used to make methylenedioxymethamphetamine, or MDMA. On the streets, the drug is the popular nightclub drug ecstasy. Agents, along with members of the Erie County Sheriff's Office, raided the man's mobile home at 6650 Route 16. The alleged lab was not in operation. Some of the key ingredients required to make the illegal drug were missing, said DEA Special Agent-in-Charge Nancy Cote. The Erie County Hazardous Materials Response Team was called in as a precaution, because some chemicals often found in illegal labs are dangerous, Cote said. Authorities would not release the suspect's name.

MASSIVE ACID SPILL LEADS TO EVACUTATION (from The Buffalo News)

Sep 07, 2006 - NORTH COLLINS, N.Y. (AP) Facilities were evacuated Thursday at Crescent Manufacturing in North Collins when about 250 to 275 gallons of hydrochloric acid spilled. Lt. Ronald Kenyon of the Erie County Sheriff's Department said there were no injuries and the spill was contained to the building. Students at nearby North Collins Elementary School, about half a mile away, were kept indoors as a precaution until it was determined there was no threat, Kenyon said. The accident happened around 9:30 a.m. The Erie County and Southtowns Hazardous Materials Response Teams responded, along with the North Collins Fire Department and several other fire companies. Dean Messing, Erie County's deputy commissioner of emergency services, said the hazardous materials teams were determining what needed to be done to complete the cleanup and would be calling in a contractor to complete it. Hazmat teams do assessment, not cleanup, in such cases. Crescent Manufacturing is a specialty chemical company that makes automotive lubricants, fuel additives, automotive appearance products and household cleaners.

Sep 07, 2006 - NORTH COLLINS, N.Y. (AP) _ Fire and hazardous materials crews are on the scene of a chemical spill at a Buffalo-area manufacturing plant. The plant in the town of North Collins was evacuated and students at a nearby school were kept in their classrooms after 250 pounds of hydrochloric acid spilled inside the Crescent Manufacturing plant this morning. Hazardous materials crews, fire firefighters and other emergency personnel are on the scene, but there are no reports of any injuries.

Thursday, September 7, 2006 10:06 AM - WBEN Newsroom
North Collins, NY (WBEN) - A chemical spill at a manufacturing plant in North Collins has forced the evacuation of the plant, and the lockdown of a nearby school. Erie County emergency personnel tell WBEN that it appears 250 gallons of hydrochloric acid spilled inside the Crescent Manufacturing plant on Eagle Street this morning. Hazardous materials crews, fire firefighters and other emergency personnel spent most of the day at the scene cleaning things up, but there are no reports of any injuries. A nearby school was briefly locked down as a precaution. It appears a valve failure caused the acid to spill. All of the acid was contained to the inside of the building.