Erie County, NY Department of Health » Changing the Language of Addiction; Substance Use Disorder is a Chronic Brain Disorder from which People Can and Do Recover

Changing the Language of Addiction; Substance Use Disorder is a Chronic Brain Disorder from which People Can and Do Recover

Changing the Language of Addiction

ERIE COUNTY, NY—In 2013, the American Psychiatric Association strengthened the classification of addiction as a disease when it dropped all “abuse” terminology from the latest edition of its Diagnostic and Statistical Manual of Mental Disorders (“DSM-5”), which serves as a universal authority for psychiatric diagnoses in the United States. The term “addiction” was mostly replaced with the more neutral nomenclature of “substance use disorder” (“SUD”). 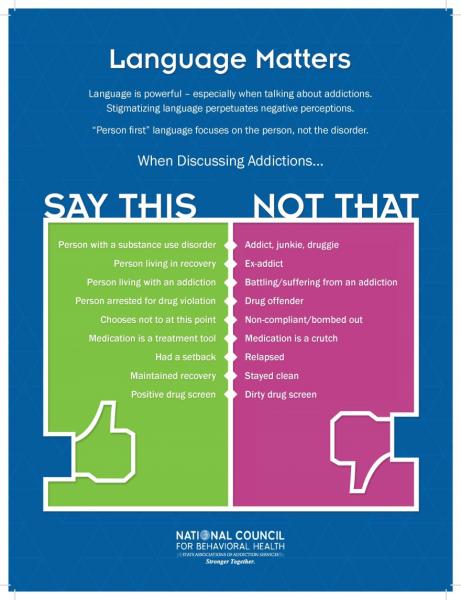 In January 2017, Michael Botticelli, then Director of the Office of National Drug Control Policy (“ONDCP”), issued a document for Federal agencies about terminology related to substance use and substance use disorders.

In June 2017, the Associated Press (“AP”) took an important step in the same direction. The new edition of its widely used AP Stylebook declares that "addict" should no longer be used as a noun. "Instead," it says, "choose phrasing like he was addicted, people with heroin addiction or he used drugs."

That means separating the person from the disease and is in line with other medical usage.

Why are these words problematic? Stigma prevents people with SUD from seeking treatment and can also prejudice medical professionals as well as law enforcement officers. Terminology used in the discussion of substance use can imply that problematic use of substances and substance use disorders are the result of a personal failing; that people choose the disorder, or that they lack the willpower or character to control their substance use.

Suggested examples for terminology replacement include:

In addition, for certain individuals with substance abuse disorder, watching news reports that show visuals of drugs, pills, needles and/or drugs being prepared for injection may serve as a “trigger” to misuse again or to return to a state of active addiction. Please reconsider the use of these visuals if they are not adding new information to your story.

By using accurate, non-stigmatizing language, we can help break the stigma surrounding this disease so people can more easily access treatment, reach recovery, and live healthier lives. Your compassionate considerations while reporting on the opioid epidemic are greatly appreciated.

Facing Addiction in America: The Surgeon General’s Report on Alcohol, Drugs, and Health. (2016). U.S. Department of Health and Human Services.


[1] National Alliance of Advocates for Buprenorphine Treatment (“NAABT”), The Words We Use Matter. Reducing Stigma through Language. https://www.naabt.org/documents/NAABT_Language.pdf