ERIE COUNTY, NY – The Erie County Department of Health (ECDOH) is warning Western New York residents about the emerging risks associated with cocaine use and the increasing numbers of cocaine-related deaths in Erie County and the United States. “We are seeing a trend in our drug overdose death data where cocaine is identified, both with and without fentanyl,” said Erie County Commissioner of Health Dr. Gale Burstein.

In 2016, the Erie County Medical Examiner’s office reported that cocaine was identified in 23% of all 325 drug-related overdose deaths. In 2018, cocaine was identified in 37% of the 230 confirmed drug overdose deaths (7 cases pending confirmation). “We are seeing a trend in Erie County of more overdose deaths with a deadly mixture of cocaine and fentanyl,” Dr. Burstein reported. In 2018, 40% of the confirmed 144 fentanyl-related deaths were also positive for cocaine, reflecting the rising prevalence of fentanyl in the region’s cocaine supply and the fatal consequences of its use.

“People who use cocaine have no way to know if it contains fentanyl or any other opioid,” said Dr. Burstein. “If you are taking a drug that has not been prescribed to you directly, you are risking an opioid overdose.”

“Cocaine is a powerful and addictive stimulant drug and it is seen by some as a social drug,” said Dr. Burstein. “Our message to the public is this: there is no such thing as a safe recreational drug. Whether fentanyl or other opioids are added to cocaine intentionally or accidentally, the effect can be deadly.”

Residents who are concerned with their cocaine, opioid or any drug use should seek care from a substance abuse treatment provider. Calling the Erie County Addictions Hotline at (716) 831-7007 can connect people to treatment for any substance abuse concerns. Although there are no FDA-approved medication to treat cocaine addiction, counseling and other treatment modalities have been successful to help people recover. 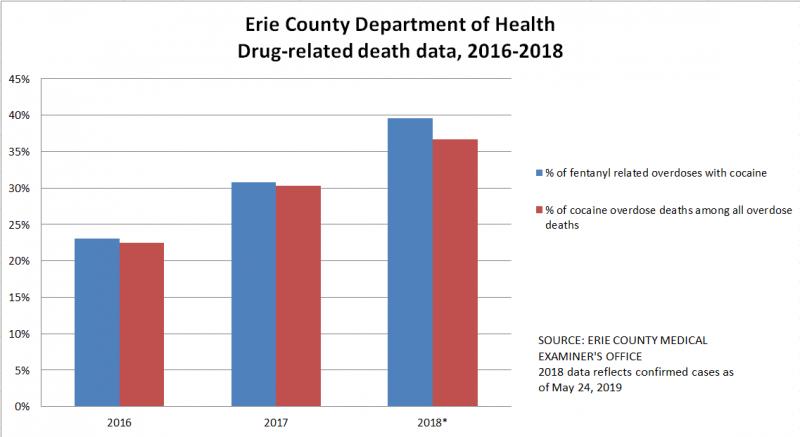