Hepatitis C--Have You Been Tested? Hepatitis C is Largest Infectious Disease Epidemic in the U.S.

Hepatitis C—Have You Been Tested?

Hepatitis C is Largest Infectious Disease Epidemic in the U.S.

ERIE COUNTY, NY— Hepatitis C virus (HCV) cases in the United States jumped by nearly 300% between 2010 and 2015—likely fueled by the use of injected drugs like heroin, the Centers for Disease Control and Prevention (“CDC”) recently reported (Morbidity and Mortality Weekly Report, 5/12/17). HCV is associated with more deaths in the United States than 60 other infectious diseases combined that are reported to CDC. The unabated increasing trend in the number of HCV–related deaths documented from 1999 to 2013

, predominantly among middle-aged persons, underscores the urgency in finding, evaluating, and treating patients in the largest infectious disease epidemic in the United States.

Despite the fact that more than 90% of HCV cases are curable, 19,000 people still died in 2013. CDC researchers noted that efforts to boost access to clean needles are one of the best ways to fight the disease’s spread. Erie County Department of Health (“ECDOH”) manages a very active and successful needle exchange program through our Expanded Syringe Access Program (“ESAP”).

“May 19th is National Hepatitis Testing Day in the United States, an opportunity to emphasize the importance of testing persons at risk for hepatitis B virus (“HBV”) and HCV infections.  Most of these individuals are unaware of their infection status,” said Dr. Gale Burstein, Commissioner, ECDOH.

Hepatitis is a blood-borne infection that affects the liver; most people who become infected with the virus develop a chronic infection that causes serious liver problems. Chronic HBV and HCV can cause liver damage, cirrhosis, liver cancer and even death. The HCV is usually spread when blood from an infected person enters the body of someone who is not infected.

Approximately 3.5 million Americans are infected with HCV and over 50 percent of them are unaware. Knowing you have HCV can help you make important decisions about your health. Successful treatments can eliminate the virus from the body and prevent further liver damage and prevent transmission to others.

People born from 1945-1965, or baby boomers, are five times more likely to be infected with HCV. Unfortunately; the reason that baby boomers have high rates of HCV is not completely understood. Most baby boomers are believed to have become infected sometime during the 1960s to 1980s when HCV transmission was highest. CDC recommends anyone born between 1945-1965, as well as anyone else at risk, such as persons who have ever injected drugs, get tested for HCV.

“While the majority of new HCV cases are baby boomers born between 1945 and 1965, there are an alarming number of new cases diagnosed in young adults,” stated Burstein. “This rise in hepatitis coincides with increases in opioid-related overdose deaths. Sharing of needles, syringes or any other equipment to inject drugs are common modes of transmission of blood-borne viruses like HCV.”

There is no vaccine for HCV, but there are treatments that can cure HCV infection.  Because persons infected with HCV are often asymptomatic for many years, most have never been tested or diagnosed.  The only way to know you are infected is with a blood test.  CDC and ECDOH encourage residents to talk to their healthcare provider about HCV testing, especially for individuals born between 1945 and 1965 or those who have ever injected drugs. 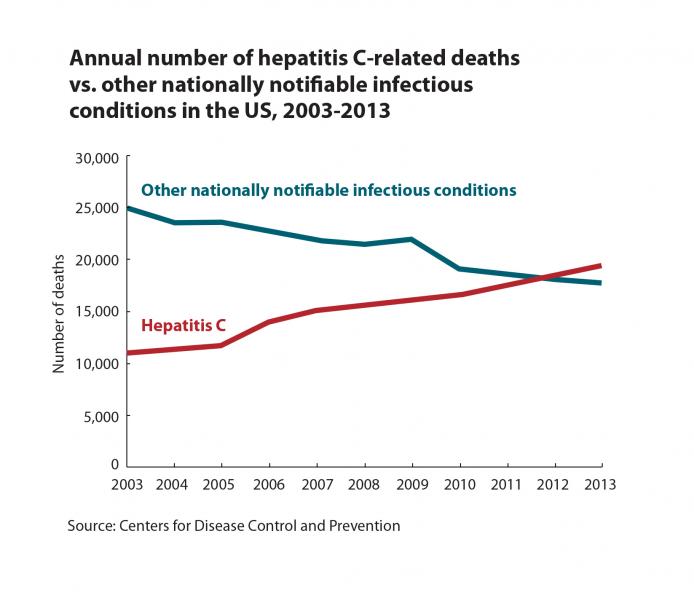 Centers for Disease Control and Prevention-

Centers for Disease Control and Prevention video: “Hepatitis C: Did You Know?”