ERIE COUNTY, NY— In collaboration with the Cornell University Animal Health Diagnostic Center, the New York State Department of Health and the USDA/APHIS Wildlife Services, the Erie County Department of Health (“ECDOH”) is participating in a wildlife baiting rabies vaccination initiative.  This program will tentatively begin today, August 19, 2014 and run through August 30, 2014.

Rabies vaccine baits will be distributed by five fixed-wing aircraft over rural areas starting on August 19th and will take approximately 3 days. Distribution via helicopter will tentatively begin August 25th and conclude by August 30th. In addition, the ECDOH Division of Environmental Health will have staff from their Rabies, Disease and Vector Control Program distributing baits via vehicles and on foot. This schedule may be adjusted slightly due to inclement (rain) weather conditions. The geographic area to be covered may be seen on the attached map.

"This distribution of vaccine-laden baits by airplane and helicopter throughout Western New York is part of an aggressive action to halt the spread of rabies in wildlife, particularly raccoons,” said Peter Tripi, Senior Public Health Sanitarian. “Rabies remains a very serious disease as it is nearly always fatal once symptoms are evident. Coordinated efforts such as this are a vital way to protect Erie County residents and their pets from contact with potentially rabid wildlife. To date in 2014, 16 animals from Erie County tested positive for rabies, predominantly bats and raccoons but other animals such as skunks and fox also. Vaccinating wildlife against rabies is a highly effective method to decrease the risk of exposure to rabies by coming in contact with rabid wildlife.”

“The ECDOH Rabies, Disease and Vector Control program is actively putting boots on the ground to hand bait areas throughout Erie County in the next few days” said Dr. Gale R. Burstein, Erie County Commissioner of Health. “Be on the lookout for our team that is helping to fight the spread of rabies, particularly in raccoons in Erie County. The new oral rabies vaccine should prove more effective than prior versions, which may lead to a drop in rabies in our raccoon populations. We anticipate a decreased risk of Erie County residents coming in contact with a rabid wild animal.”

Residents should not disturb baits if they see them. Most baits are eaten within four days and almost all baits are gone within a week. If baits are not found and eaten, they will dissolve and expose the vaccine; sunlight and exposure to air inactivates the vaccine. Residents should WASH HANDS IMMEDIATELY if they come into direct contact with the vaccine or bait, then call the New York State Department of Health Rabies Information Line at 1-888-574-6656. Other recommendations for the public include:

• The baits and vaccines are not harmful to domestic animals; however, an animal may vomit if it consumes several baits. Residents should not risk being bitten while trying to remove a bait from your pet’s mouth. 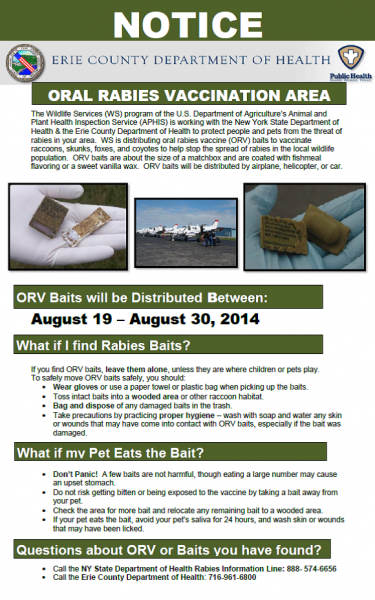 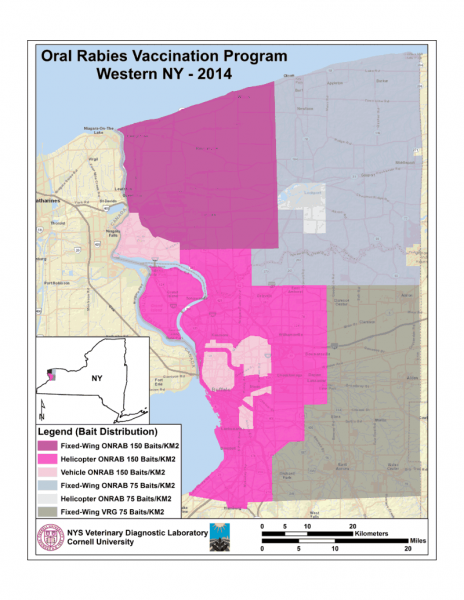