Erie County government has changed in recent years to meet the needs of its residents. It has taken on new functions and expanded on others to provide the services that are needed in order to help our county programs. 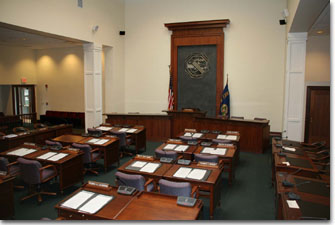 The Board of Supervisors continued to function after the approval of the Charter. There were 54 members on the Board, 27 from the City of Buffalo (each elected from a ward), and 27 other members, one from each town in the county and the cities of Lackawanna and Tonawanda. The Supervisors from the towns also served as the heads of their own town boards.

The Charter also provided that the Board of Supervisors would continue as the 'governing body' of the county, with the power to make policy decisions. The County Executive is in charge of county administration. With the adoption of the Charter, Erie County established a traditional form of legislative, executive and judicial separation of powers which is common to all other levels of government.

Every ten years following the U.S. Census, the Erie County Legislative districts must be reapportioned to reflect population shifts and changes. The purpose of reapportionment is to ensure that each and every voter in Erie County has equal representation.

In 1981, County Legislature boundaries were altered to reflect 1980 population figures. The Legislature's reapportionment plan reduced three legislative districts which reduced the size of the body to 17 seats.

Legislative districts were reapportioned again in 1991. Slight adjustments in the 17 district boundaries were made.

Based on the 2000 Census numbers, the Erie County Legislature passed a reapportionment plan, beginning on January 1, 2004, that included the reduction of two districts, lowering the number of districts from 17 to 15.

By a citizen referendum approving the measure, the Legislature was reduced to 11 members in November 2010, with that Legislature reapportionment and number taking effect January 1, 2012. Each of the 11 legislators now represents approximately 82,000 citizens.