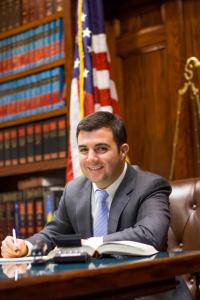 The Erie County Legislature held its annual reorganizational meeting on Thursday, Jan. 8, 2015 and elected Legislator John Mills to his second term as Chairman. He was appointed unanimously (11-0) to the one-year term.

“I am honored to have the support of my colleagues to continue serving as Chairman. We had a lot of success in 2014 during my first year in the position and I look forward to a productive new year. The Legislature has a lot of work to do to capitalize on the 2015 tax decrease we delivered and to continue the trend of delivering relief for taxpayers,” said Chairman Mills.

"In our first year in the majority, our Caucus made significant changes to how the Legislature operates, held departments and commissioners accountable, implemented internal reform and improved overall efficiency. As a result, the administration has also had to adjust how it operates, knowing the Legislature will not simply rubber-stamp items like it did during the first two years of the County Executive's term.  I am proud of the improvement Erie County has achieved under our leadership. However, our job continues and we pledge to remain diligent in dealing every matter that comes before this body,” said Majority Leader Lorigo.

For information on County Legislature agendas, schedules and other information, please visit www.erie.gov/legislature.