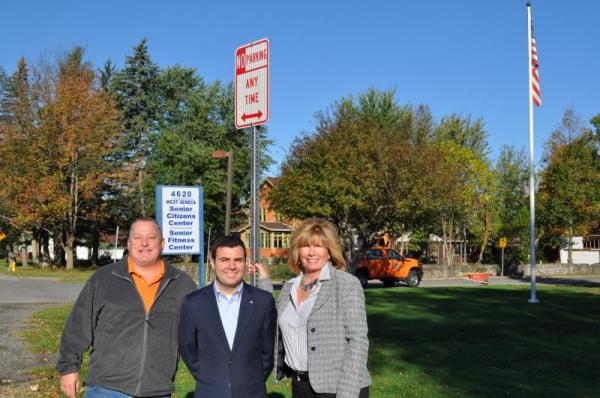 Erie County Legislator Joseph Lorigo and West Seneca Supervisor Sheila Meegan announce that parking is no longer allowed on Seneca Street in front of the Senior Center to improve safety along that stretch of roadway.

A “No Parking” sign, produced through the county’s Department of Public Works and installed by the West Seneca Highway Department in early October, prohibits parking near the entrance of the Senior Center, which is located at 4620 Seneca St., to allow anyone exiting the center to have a clear view of the roadway.

“Cars parked along Seneca Street were causing an obstruction and impairing the line of sight for drivers attempting to exit the senior center, creating an extremely dangerous situation,” said Legislator Lorigo. “After identifying the issue, the county and town worked together to ban parking along that stretch of roadway and place the new sign indicating such. It was a cost effective and simple solution to a serious issue, and I am glad the matter has finally been resolved.”

“Anyone who drives along Seneca Street or has attempted to make a left-hand turn out of the Senior Center knows how treacherous it was. The ‘No Parking’ sign will keep the field of vision open and that area safer. As Supervisor, it’s truly a benefit to the residents of West Seneca to have a working relationship with Legislator Lorigo to take care of issues without delay,” said Supervisor Meegan.