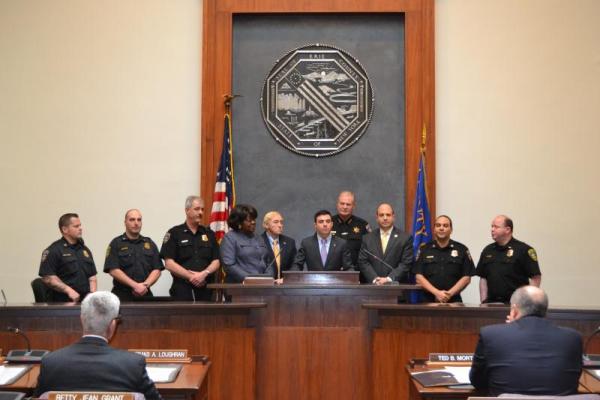 "Congratulations to Sheriff Howard and the entire Sheriff's Office and Jail Management Division for creating the Veterans Housing Unit to assist those who have served our country and now need assistance," said Majority Leader Joseph Lorigo.

Sheriff Timothy B. Howard and the Erie County Sheriff’s Jail Management Division were honored for Veteran Housing Program which is a 28-bed unit opened inside the Erie County Holding Center in October 2013 to be used exclusively to house veterans. Typically, incarcerated veterans suffer similar ailments, including post-traumatic stress disorder. Housing veterans together at the Holding Center will allow them to talk, relate and lean on each other to get back on the right path. The Holding Center averages about 22 incarcerated veterans on any given day.

Also, housing the veterans together in one location will assist the Veteran’s Court and Veterans Administration in better serving the needs of veterans who have been incarcerated, allowing the staffs of both to hold group counseling sessions and linking veterans with existing sources.

Of the program Sheriff Tim Howard said, “This is really a win-win situation for everyone involved in helping with the rehabilitation process of men who have served our Country. If anybody deserves a second chance, it’s the men who put their lives on the line to defend our Nation.”

The New York State Sheriff’s Innovative Program Award was created to encourage the sharing of programs that enhance the efficiency and delivery of Sheriff’s services among New York State’s 58 Sheriff’s Offices.