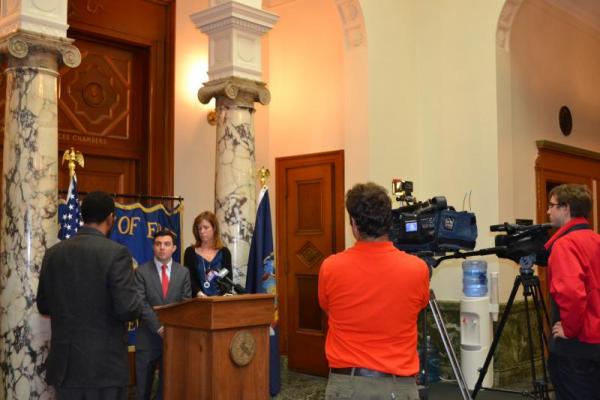 Erie County Legislature Majority Leader Joseph Lorigo is calling for the resignation of Erie County’s Department of Social Services Commissioner Carol Dankert-Maurer following reports that Child Protective Services, the department which she oversees, was investigating the case involving the 8-year-old North Buffalo boy whose mother is charged with his death. This tragic death is one of several children who had cases with CPS yet who were killed by parents or caregivers. Majority Leader Lorigo made the announcment during a press conference held May 23, 2014 and was joined by his colleague, Legislator Lynne Dixon, Chairwoman of the County's Health and Human Services Committee.

“I know I join the entire Buffalo community when I say I am devastated by the recent reports of young lives lost. These tragic deaths are all the more difficult to process when we learn that their deaths were at the hands of parents or caregivers who should be protecting these youths. Unfortunately, in the vast majority of these cases, the children had files with Erie County’s Child Protective Services and the department failed these children. Because of the serious issues surrounding CPS, and the continued lack of improvement and changes, I am calling for the resignation of Commissioner Carol Dankert-Maurer. We have to acknowledge that Ms. Dankert-Maurer has failed in her role, and her continuation as commissioner is unacceptable. The issues within the Department of Social Services are substantial and I strongly believe changes must begin at the top,” said Legislator Lorigo.

In a letter delivered to County Executive Mark Poloncarz’s office today, Legislator Lorigo requests that the administration, with the support of the Legislature, take the necessary steps to locate a qualified candidate who is fully capable of leading the department and protecting the lives of Erie County’s most vulnerable.