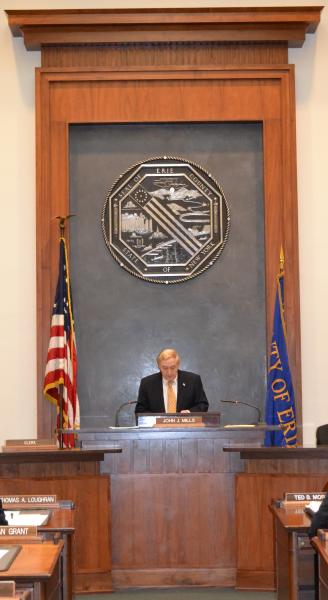 A native of Western New York and Orchard Park, Legislator John J. Mills graduated from Orchard Park High School and earned a degree in Business Administration from the University at Buffalo. He has spent his adult life in service to the region in general and Erie County in particular. A successful businessman, Legislator Mills is President of J. Mills Distributing Company, a successful food distribution company that he founded in 1976 with his wife, Barbara. Very much a family operation, the business has been built with their three grown children and other close relatives into a very successful enterprise, from which John gives back generously to the area with untold donations of food to a myriad of fundraising events and worthy causes throughout the region. He also serves as the President of Quality Food Brokers, M J M Industries and Florida's Finest Food Brokers.

Not content with what he could do for the area from his business, John became involved in Orchard Park government as a member of the Public Safety Committee for a year and then as a member of the Zoning Board of Appeals on which he served for four years before being elected to the first of his six four-year terms of office as a Town Councilman. At times during this period, he served as Deputy Supervisor, co-founded the Zoning Commission and served as Chairman of the South Towns Sewage Treatment Agency.

He was elected to serve as Chairman of the Erie County Legislature in 2014, 2015, 2016 and 2017 after serving as Minority Leader. He was the first Republican to hold the position in 36 years.

He attends governmental meetings in every town and village in the 11th district, and also meets with many groups within those towns and villages.