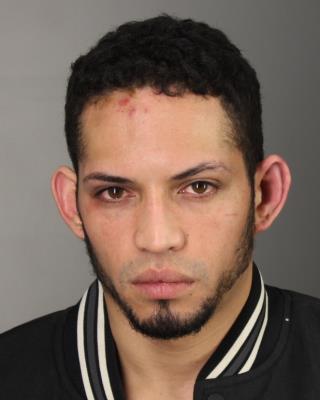 The Defendant also Vomited Marijuana in the Patrol Vehicle

At approximately 10:30 P.M. on February 25, an Erie County Sheriff’s Deputy initiated a traffic stop on Goodrich Road in the Town of Clarence for a speeding violation.  During the stop, the Deputy detected the strong odor of marijuana and asked the operator to exit the vehicle.  The driver turned away from the Deputy, reached into the center console and concealed an item in his hand. At this time the subject was ordered out of the vehicle, and when he exited the vehicle, he pushed away and fled on foot.

Other Deputies arrived and joined the foot pursuit, and during the incident, Deputies observed items falling from the suspect.  The individual was apprehended but continued to refuse law enforcement orders and resist the Deputies.  The suspect was taken into custody, and a sock containing 21-grams of cocaine was discovered.  While the suspect was in the patrol vehicle, he regurgitated an amount of marijuana.

Arrested and charged following the incident was 27-year-old Moises Lopez-Encarnacion.  The defendant is charged with a felony count of criminal possession of a controlled substance and two felony counts of tampering with physical evidence.  He is also charged with misdemeanor counts of obstructing governmental administration, and resisting arrest as well as unlawful possession of marijuana and speeding.

After an evaluation at the Erie County Medical Center, Lopez-Encarnacion was taken to the Erie County Holding Center and held without bail pending his arraignment in Clarence Town Court.

During the incident, a Deputy sustained a hand injury.  The Deputy was treated and returned to duty.