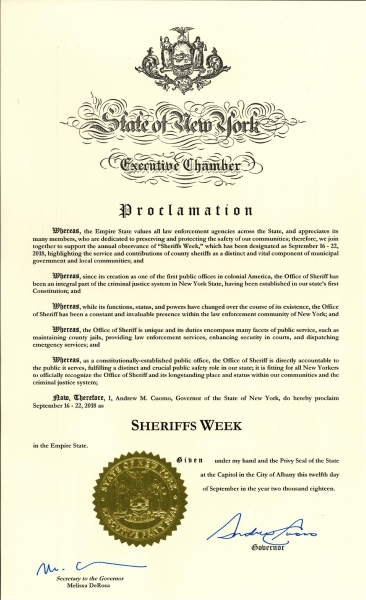 Buffalo, NY – Sheriff Timothy B. Howard announces Governor Cuomo, and the Erie County Legislature has proclaimed the week of September 16-22, 2018 to be Sheriff’s Week in New York State and Erie County. Sheriff’s Week celebrates the significant contributions made by the office of sheriff in county government and the statewide criminal justice system.

Sheriff Howard said, “I want to thank the members of the Erie County Legislature and the state for recognizing the hardworking and dedicated sworn officers and civilian employees of the Erie County Sheriff’s Office.  This office works 24/7, 365 days to protect the citizens of Erie County and this recognition means a lot to these dedicated public servants and me.”

The legislature passed the Sheriff’s Week proclamation (Proclaiming September 16-22, 2018 as Sheriffs Week in Erie County) at the September 6 session and it was sponsored by: