EMERGENCY SERVICES IN THE VILLAGE OF ALDEN

In 1869 a charter established the Village of Alden in the southeastern part of the Township of Alden founded in 1823 becoming one of the 26 townships comprising Erie County, New York state. By the end of the 19th Century fire protection became an issue as homes and business's built in close proximity to each other presented a danger that could destroy the entire village if one of those homes or business's caught fire. People throughout the U.S. were very aware of the horrible fire that had ravaged Chicago, Illinois - killing several hundred people.

A fire brigade existed in the village with a hand pumper and bucket brigade and the mayor acting as chief if a fire was reported. In 1898 the village completed a water system providing water service to the homes and business's and hydrants spaced out along the many streets in the village of Alden. Within a year the first formal fire company was approved and put in service by Alden's Village Board. In August, 1899, the Alden Hose Co. went into service. A group of men and one hand pulled hose cart.

In 1950 the two fire companies merged and became one; the Alden Hook & Ladder Fire Co. Within a few years the village company would provide fire protection to the township surrounding the village as town of Alden would be protected by four companies, Alden H&L Fire Co., Crittenden Fire Co, Millgrove Fire Co. and Townline Fire Co.

In the early 1960's the Hook & Ladder Co. would move to a new fire station on Broadway shared with the Village of Alden government joined the Millgrove Fire Co. - providing ambulance service to all residents in Alden. In 1969 the Alden H&L FC added a 65'ariel device to the apparatus serving the community. In the mid 1980's a second fire station was added on Broadway 2.5 miles west of the main hall.

A Ladies Auxiliary became part of the fire service in 1933 and women became active firefighters and EMT's in 1980. Besides fire protection and First Aid the fire company has an under water search and rescue team and members trained in auto extrication using the Jaws of Life.

Presently 50 plus members serve in the Alden H&L FC and the company operates three pumpers, a 75' aerial - pumper, one rescue truck, two ambulances and a water rescue truck complete with a 15' rescue boat and trailer. The members are led by a Fire Chief and three Assistant Chiefs.

To help pay the bills the membership has sportsmen raffles and an annual Chicken BBQ. 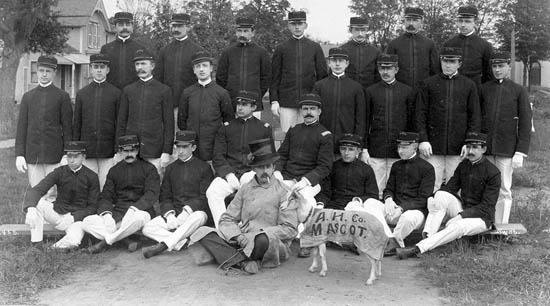 We need volunteers to serve in the Village and Town of Alden as Volunteer Firefighters and EMS providers. No prior experience is necessary.
If you wish to serve your community in an interesting a rewarding way, stop by our main firehall, 13336 Broadway on any Monday between 7:00P.M. and 10:00 P.M.