Sustainability is a broad topic that encompasses a host of issues that the County has been working on for many years. This page will focus on actions that directly relate to climate change mitigation and resilience. Erie County’s longstanding work on watershed management, household hazardous waste, solid waste and recycling, habitat restoration, and stormwater are all sustainability issues that can be found the Erie County Department of Environment & Planning Environmental Services page

In October 2018, the Intergovernmental Panel on Climate Change issued a report on the significant impacts of climate change even if the global temperature is held to a 1.5 degree Celsius increase from pre-industrial conditions.  The report, authored by 18 scientists with more than 69 contributing authors, makes clear that unprecedented action is needed to avoid catastrophic changes to the climate. Scientific reports and first-hand experience provide overwhelming evidence that climate change is one of the most significant threats to Erie County. Indeed, it will have far-reaching impacts on the entire community and affect the County’s ability to deliver services. Erie County can do its part to support worldwide efforts to reduce the severity of these impacts by taking action to reduce greenhouse gas (GHG) emissions in the community and from its own operations.

Erie County has shown strong leadership on environmental sustainability and climate protection.  In June 2017, the County Executive issued Executive Order 17, which requires the County to meet the goals of the Paris Climate Agreement: a 26-28% reduction of 2005 GHG emissions by 2025. 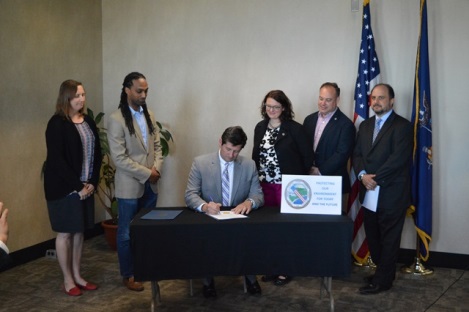 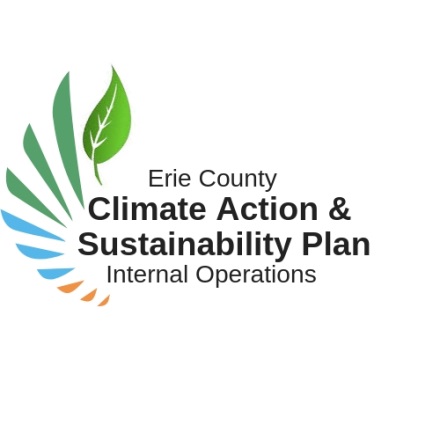 The Climate Action & Sustainability Plan (CASP) outlines and prioritizes ways the County can further reduce GHG emissions from its internal operations through action items specific to each chapter. Overall GHG emission reduction goals were set for a short-term timeframe, mid-term time, which aligns with the Paris Agreement, and long-term. The following reduction goals are set against a 2005 baseline and were based on initiatives already begun within County operations, and from the measures listed in the CASP:

Erie County has established a Green Team to pursue sustainability initiatives in its internal operations. As called for in “Initiatives for a Smart Economy”, the Green Team is focusing on energy reduction and resource conservation projects that will decrease greenhouse gas (GHG) emissions, prevent pollution, reduce waste, and save money throughout the County’s daily operations.

The Erie County Green Team is made up of representatives of every County department, including those led by other elected officials such as the Sheriff and the Comptroller. The team met monthly in the County Executive’s conference room and brainstormed actions the County could take to reduce their GHG emissions from government operations. The Green Team now meets quarterly to report on progress associated with implementing the initiatives listed in the CASP. 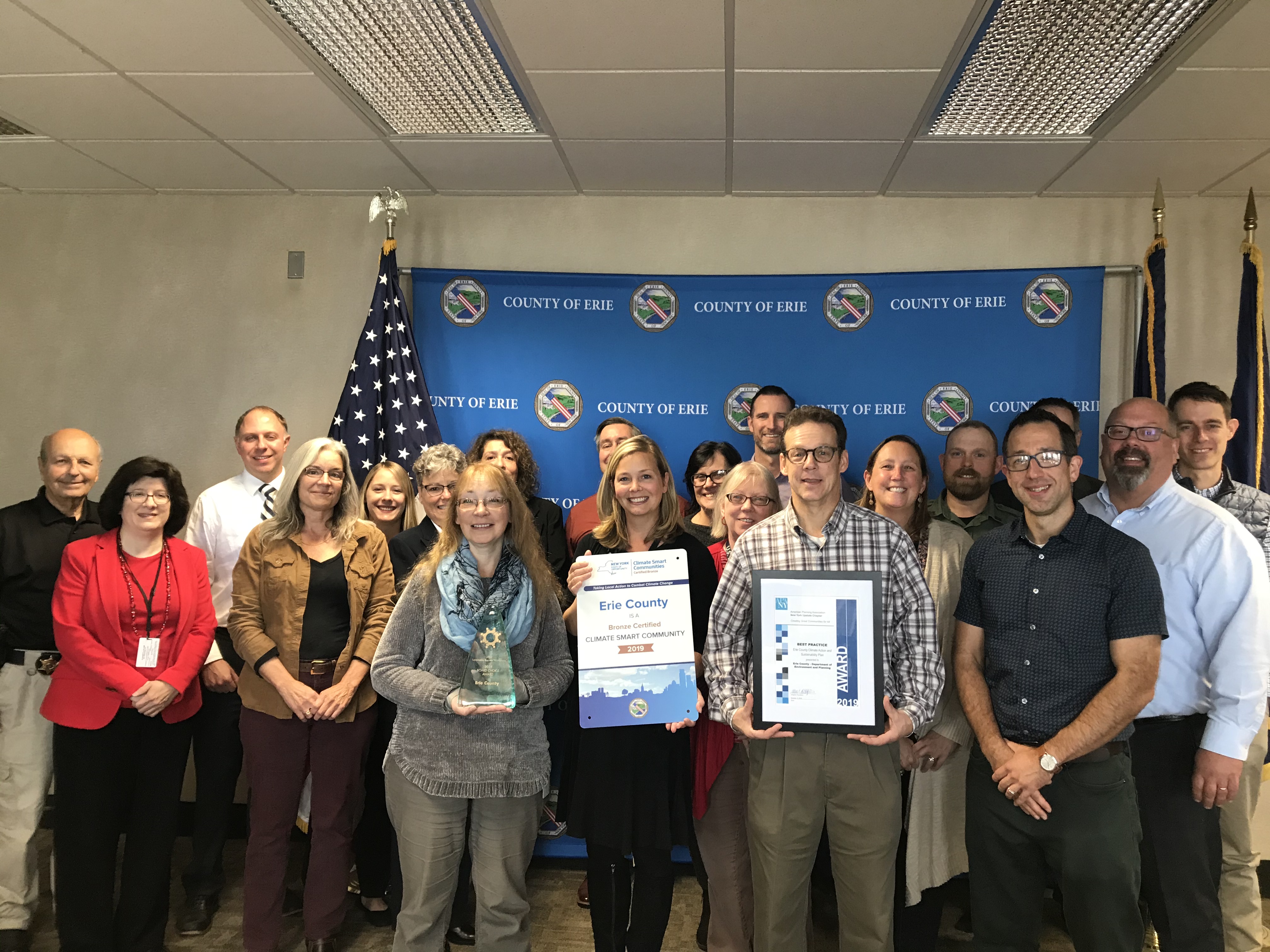 New York State Department of Environmental Conservation, through its Climate Smart Communities program, is leading an initiative to support local governments as they take action to reduce greenhouse gas emissions and adapt to climate change. Benefits include leadership recognition, free technical assistance, and access to grants.

“Erie County can take action to ensure its part in pro­tecting the well-being and future of our planet by pro­mulgating a plan to implement the United States target contribution plan to the Paris Agreement, as it pertains to Erie County, and to take such further action as it may by law to enforce the target contribution goals set by the United States within the bounds of the County of Erie, State of New York.”

This statement in Erie County Executive Mark Poloncarz’s Executive Order #17, Enforcement of the Paris Climate Agreement, captures the essence of why Erie County is compelled to take action on this global priority despite a lack of leadership at the federal level. Along with other state and local officials across the United States, County Executive Poloncarz seeks to protect our County, as well as our state, nation and world, from the impacts of climate change by committing to reduce greenhouse gas (GHG) emissions.

In response to that Executive Order, the County released the Erie County Commits to Paris report in January 2018. The report included GHG inventories for both County operations and the community as a whole, as well as 37 initiatives to decrease GHG emissions. 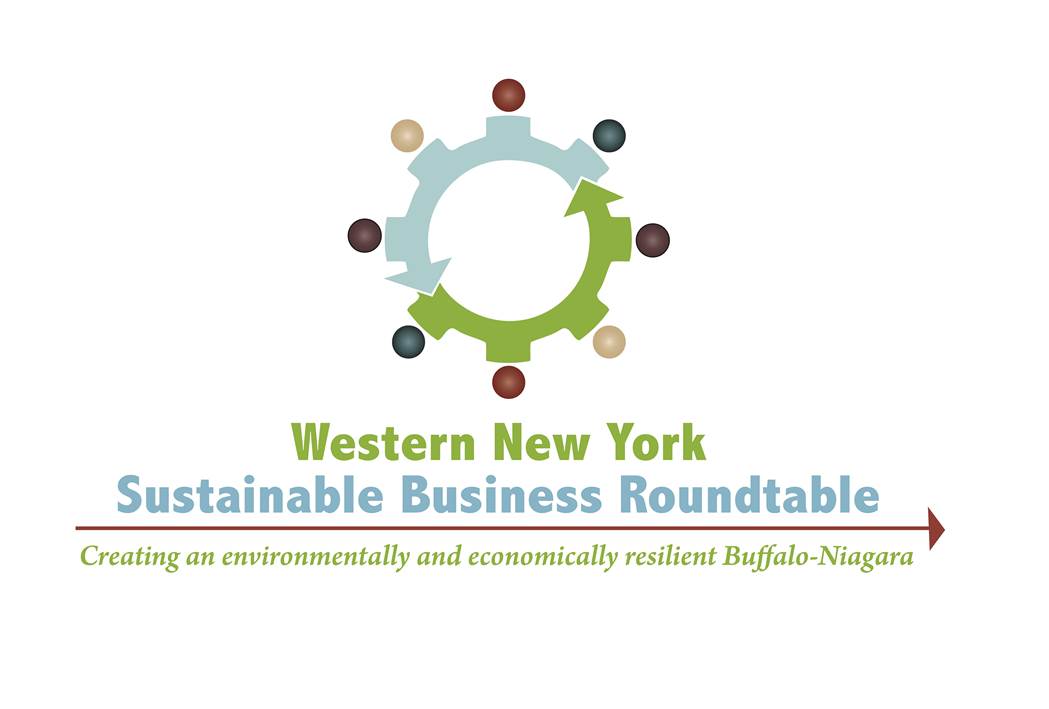 WNY Sustainable Business Roundtable (SBR) connects and supports leaders and professionals from business and industry, academia, non-profit and government who are investing in sustainability and the triple bottom line. The SBR has been made possible partly by USEPA grants obtained by Erie County, which have allowed the County to provide a coordinator for the organization.

SBR members have pledged to make their organizations more effective, efficient, and profitable as they:

The Environment Management Council (EMC) Committee is an advisory board to the County, largely made up of municipal representatives, as well as 12 at-large members. In 2019, the EMC convened a Climate Change Task Force that, as a committee of the EMC, will provide expert guidance and community input to the County as it makes decisions about its climate change mitigation, resilience and other sustainability actions. 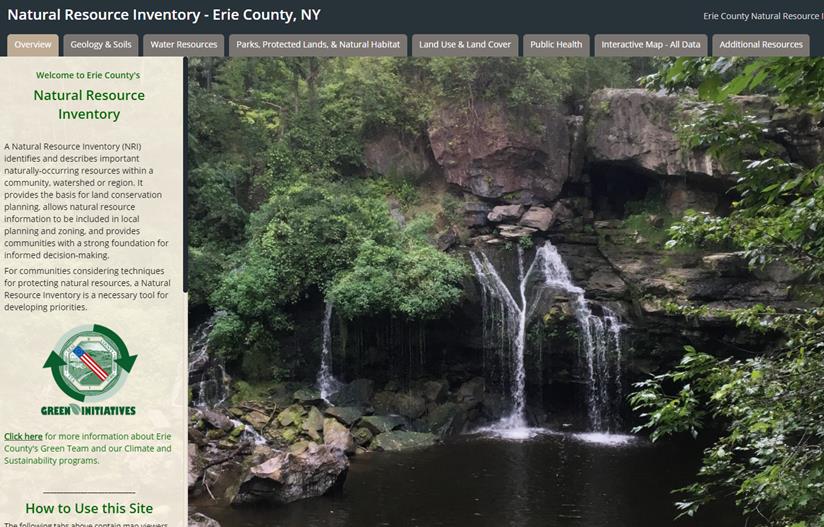 Erie County is planning its response to the anticipated impacts that climate change will have to County infrastructure and the community. In 2018, DEP was awarded a NYSDEC grant to work with the University at Buffalo to conduct an interdepartmental planning process to identify actions to make the County more resilient to impacts from climate change. Part of this effort is expected to focus on addressing threats to the vulnerable populations that the County serves with its social services and health programs. This is a two-year project that will kick off in 2019.