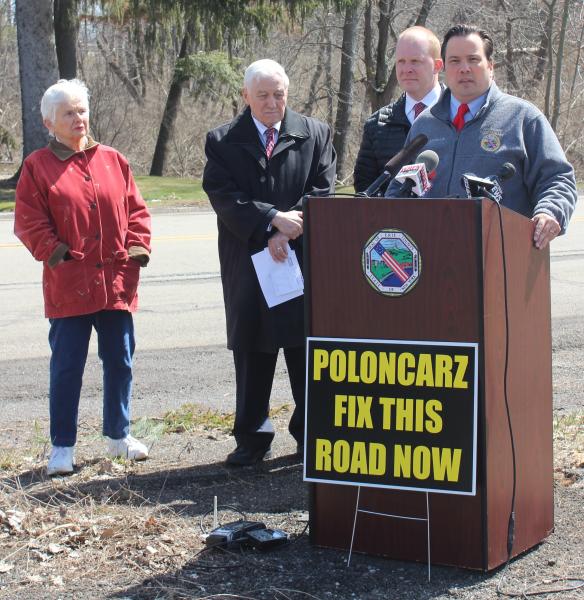 Town of Boston officials and taxpayers, along with Erie County Legislator John Mills and Erie County Comptroller Stefan I. Mychajliw Jr., took action to bring attention to the deteriorating roads in that town. School buses transport young students on these roads, littered with potholes and crumbling shoulders, to Boston Valley Elementary School.  Bright road signs that read, “POLONCARZ FIX THIS ROAD NOW,” are now being placed along Zimmerman Road and Back Creek Road.

“Children on buses are driven on these hazardous roads every day.  The road looks like a war zone, not a school zone.  It is a struggle to drive on Zimmerman Road and Back Creek Road.  I used to go on a daily walk on these roads.  I can’t anymore.  It is not safe to walk, let alone drive on these roads.  It is unfortunate that the conditions of our roadways were allowed to get this bad.  Now we need action. For the safety of everyone, especially the students on school buses, we are calling on the county to repair these big potholes,” said Town of Boston taxpayer Jean Washburn.

“Taxpayers complain to me all the time about the potholes.  People get pretty upset when they’re told these rough roads are the responsibility of Erie County.  There is one section of Back Creek Road where it looks like half of the roadway is gone. That is unacceptable.  It is unsafe for families and school buses that drive on the county roads,” said Supervisor Jason Keding, Town of Boston.

Erie County Legislator John J. Mills, whose district includes the Town of Boston, is giving taxpayers an opportunity to voice their concerns directly to the County of Erie.  Legislator Mills, who said the biggest taxpayer complaint he receives is about potholes on county roads, wanted to make sure families knew it was the responsibility of the County of Erie to fix and fill potholes on county roads.

“The deplorable condition of our county roads is frustrating, inconvenient and above all a safety concern,” said Legislator John Mills. “The state of disrepair seen on Zimmerman Road is particularly unacceptable. We need the administration to act quickly before someone gets hurt.”

Jean Washburn, who has lived in the Town of Boston for many years, called Erie County Comptroller Stefan I. Mychajliw Jr. in March, and invited him to see for himself the conditions of roads that she and her family drive on.  Washburn and Comptroller Mychajliw drove together up and down Zimmerman and Back Creek Roads in March.  Following that tour of Erie County roads littered with potholes, Comptroller Mychajliw wrote a letter to the Administration of Erie County Executive Mark Poloncarz, demanding that the county fix the potholes immediately.

“The county is telling school districts how to spend their money.  Erie County needs to get its own house in order first.  Fix these potholes and gaping holes in county roads now.  Then go ahead and focus on issues that have nothing to do with county government.  County roads are a disaster that resemble Third World countries, and that’s an insult to Third World countries.  I hope they’re not offended that Erie County roads are compared to theirs. Safe roads are a mandate, not a luxury,” said Comptroller Mychajliw.

In a letter dated April 9th, 2018, Comptroller Mychajliw wrote a letter to homeowners living on Back Creek Road and Zimmerman Road.  In the correspondence, Comptroller Mychajliw told taxpayers that he already notified the Erie County’s Department of Public Works about the potholes on those roads, and that the roads in their entirety need to be fixed.

“I drove the entire lengths of Zimmerman Road and Back Creek not that long ago.  I can tell you that it is already worse today. Children and their bus drivers deserve better.  Parents should be concerned every time their child is on a bus that travels on a county road.  It is disappointing that it has come to this, with homeowners installing yard signs in hopes the County Executive will use their hard earned tax dollars to fix their roads,” concluded Comptroller Mychajliw.