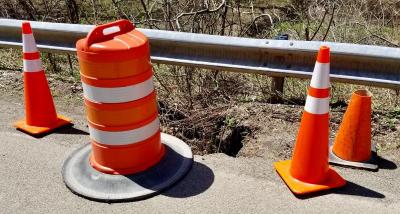 Erie County Comptroller Stefan I. Mychajliw Jr. notified Erie County Public Works Commissioner William Geary about the crumbling conditions of deteriorating county roads in the Town of Collins, including ditches littered with old tires, trees and air conditioners. Comptroller Mychajliw was contacted by a concerned taxpayer when they witnessed a school bus crossing the center, yellow line to avoid damaging tire rims by swerving around potholes.

The dilapidated infrastructure was documented, photographed and put in official correspondence to DPW Commissioner Geary on April 30th, 2018.

Comptroller Mychajliw toured Taylor Hollow Road, Quaker Road and Bagdad Road the very same day, April 30th, 2018. In addition to seeing numerous potholes and garbage piling up in ditches, Comptroller Mychajliw also measured a six-foot wide gaping hole on the side of the Bagdad Road. The huge hole in the road was surrounded by orange cones and orange barrels. 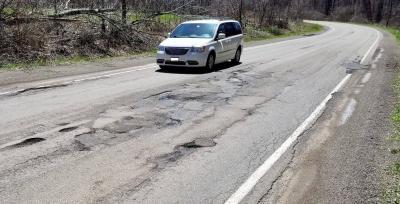 “Buses from the Gowanda Central School District are avoiding the sides of the roads, which is especially hazardous around certain corners. Potholes and shoulders had water pooling in them, indicating that the drainage around the roads is inadequate. Where there were ditches, debris clogged them and negated their effectiveness. In other areas, the shoulders around the road were significantly higher than the road itself. Poor drainage will create further problems,” wrote Comptroller Mychajliw to Commissioner Geary.

“Mark Poloncarz has checked out from the job of Erie County Executive. He cares more about banning plastic bags, the Paris Climate accords and supporting refugees than he does fixing potholes and repairing his crumbling infrastructure. Before talking about school consolidation, fix county roads first,” concluded Comptroller Mychajliw.