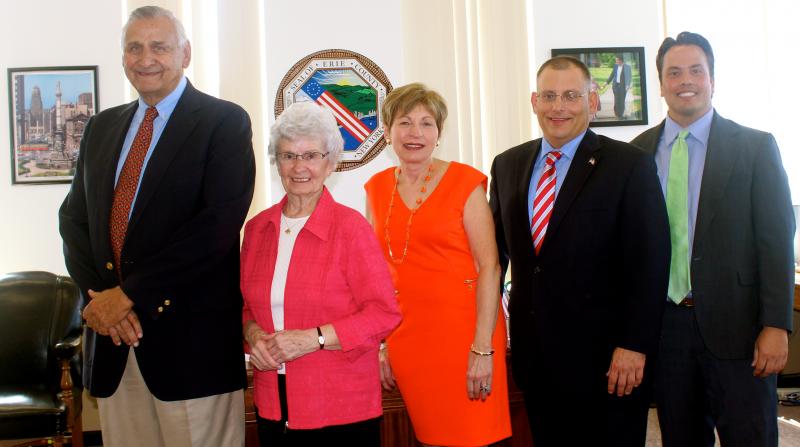 “There have been eight people in the history of county government that have had the privilege of serving as the taxpayer’s watchdog. It is an honor few of us have had the pleasure of experiencing.  Being Erie County Comptroller is a worthy endeavor, one that allows us to fight for taxpayers every day,” said Comptroller Mychajliw.

“The battles can be tough. You do not make a lot of friends holding politicians accountable.  That is fine with us.  We knew the responsibilities and importance of the duties when we entered public service.  This is not a ‘job’ for us. We serve honorably to protect taxpayers and create a government that works for the people,” added Comptroller Mychajliw.

Eight people have served as Erie County Comptroller ranging from the first, Henry Nowak, to current Comptroller Stefan I. Mychajliw.

In 1964, Erie County, under a new charter, elected its first independent Comptroller.  The Honorable Henry Nowak served Erie County from 1964 until he was called to serve in Congress in 1974. Nowak represented NY’s 37th District from 1975 until 1983 and, following the 1980 Census, represented the 33rd District from 1983 until 1993.

“It was an honor to serve as the first County Comptroller.  The taxpayers created this office because they wanted an independent public servant keeping an eye on their tax dollars,” said the Honorable Henry Nowak.

In 1975, the Honorable Alfreda Slominski was elected as County Comptroller.  Before her election, Mrs. Slominski spent time as an officer with the Central Intelligence Agency and was an attorney with Slominski & Slominski from 1958-1962.  After serving on the Buffalo Board of Education and the Buffalo Common Council, she ended up having one of the longest and most storied tenures as Comptroller.

“Lots of politicians wanted to eliminate the independence of this office.  Not on my watch would that ever happen,” said the Honorable Alfreda Slominski.

After Alfreda Slomisnki’s departure in 1993 the Honorable Nancy Naples was elected and begun her tenure in 1994.  Comptroller Naples served for over ten years in Erie County. After her time as Comptroller, Governor George Pataki appointed Mrs. Naples to be Motor Vehicles Commissioner and Chairwoman of the Governor’s Traffic Safety Committee.  In 2007, President Bush nominated her to be on the Board of Directors for Amtrak. She was confirmed by the Senate for that role in 2008.

“It was so nice to come back and see staff.  The hard working employees make the Comptroller’s what it is: the backbone of the accounting and auditing function of government,” said the Honorable Nancy Naples.

The Honorable David Shenk was appointed to the position of Erie County Comptroller in 2012.  Before he began his tenure as Comptroller, Mr. Shenk served his country as a member of the US Army Reserves. He was deployed four times in his distinguished military career, serving in Operations Desert Storm, Iraqi Freedom, and Enduring Freedom in Afghanistan.  As a public servant in the Town of Boston, Mr. Shenk served as the Town Clerk and Tax Collector.

“Despite my tenure here being short, it was an honor and privilege to serve taxpayers.  The current Comptroller inherited a great group of individuals as his staff,” said the Honorable David Shenk.

“This was a wonderful event. I greatly appreciate Comptroller Mychajliw’s invitation.  The men and women in this room were the trailblazers for the two of us. They set the standard for what it means to be the taxpayer’s watchdog. I’m humbled to be a part of this group,” said  City of Buffalo Comptroller Schroeder.

For a copy of the press release, please click here.