COMPTROLLER MYCHAJLIW OVERSIGHT: $1.5 MILLION IN ASSETS UNACCOUNTED FOR IN TOWN OF BOSTON 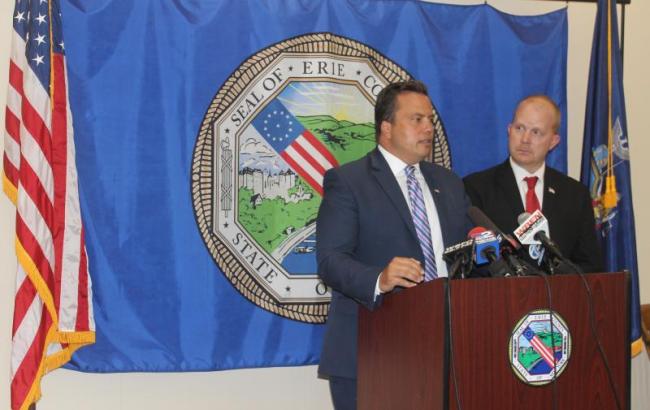 Erie County Comptroller Stefan I. Mychajliw completed a formal review of government finances and fixed assets in the Town of Boston, New York, and found almost $1.5 million in assets were unaccounted for.  Of the approximately $1,463,635 in equipment, tools and other fixed assets that are not accounted for, approximately $1,142,117, belonged in the Town of Boston Highway Department.

Auditors from the Office of Erie County Comptroller found documentation for the $1.5 million in fixed assets belonging to the Town of Boston, but could not be shown by Boston officials or its employees exactly where it all is, leading auditors to conclude in their report it was either “sold, scrapped, stolen or otherwise misappropriated.”

“This equipment belongs to the taxpayer.  Erie County shared $1.1 million in sales tax revenue with the Town of Boston last year.  Town of Boston and all Erie County taxpayers paid the bill for Boston to buy this equipment.  Now the Town cannot account for almost $1.5 million in fixed assets.  The equipment may have been stolen.  These fixed assets could have been sold or scrapped.  Our auditors were not provided documentation that shows exactly what happened to $1.5 million in equipment, most of it from their highway department,” said Comptroller Mychajliw.

To put this dollar figure in perspective, the entire 2017 Town of Boston budget was approximately $4,819,190.  The $1.5 million in unaccounted fixed assets in Boston is just under one-third of the entire budget and is actually more than the Town’s entire 2017 Highway budget of $1,134,344.

At the request of the new Boston Town Supervisor Jason Keding, Comptroller Mychajliw’s office reviewed the town’s financial records and found areas that critically need to be approved upon. The Boston Town Board passed a resolution in February of this year, formally requesting auditors from the Office of Erie County Comptroller to review finances in the Town, with the goal of receiving recommendations on how Supervisor Keding and Board members can improve Boston’s fiscal health.

“As the newly elected supervisor, I felt it was important to determine exactly what kind of budget I inherited.  That is why our Town Board passed a resolution in February, asking the Office of Erie County Comptroller to investigate.  It was my goal to dig deep and determine the fiscal health of our town.  This independent review offered pointed recommendations on how I can clean up this mess that I inherited.  The buck stops with me. I’m thankful for this eye opening review.  I will now get to work fixing this mess for the taxpayer,” said Town of Boston Supervisor Jason Keding.

Auditors from Comptroller Mychajliw’s office performed a complete physical inventory of the Town of Boston’s assets by department for the year ending December 31st, 2017, prior to Mr. Keding taking office as Supervisor.  In addition to finding almost $1.5 million in equipment that was unaccounted for, the Comptroller’s Office review was also highly critical of the town’s inventory practices and procedures.

Office of Erie County Comptroller auditors identified an additional $2.7 million in equipment currently in use, but Town of Boston officials could not provide the documentation that showed exactly where it came from.  Unlike the $1.5 million in fixed assets that are unaccounted for, this additional $2.7 million is for equipment that actually exists, but no documentation can be provided to show where it was bought, how it was bought, who it was bought from, or even where it came from.

A review of policies and procedures in Boston that relates to purchasing and inventory/documentation of equipment either did not exist, were not being followed, or even conflicted one another.  For example, the Town of Boston procurement policy is clear on requirements to make purchases between $1,500 and $5,000, but there are no written policies or procedures on how to buy anything in the Town of Boston if it costs between $5,000 and $10,000.

In some cases, Town of Boston employees, prior to 2018, were also found not to be using their Purchase Request Forms (PRF) to document when equipment/fixed assets were purchased.  They were also not filling out their “asset disposal forms” so that people knew when items were obsolete or thrown out.

For example, even though the Town of Boston sold a 1998 plow truck for $2,650 at auction in 2017 and a 2003 cargo trailer for $3,050, no one could provide the “asset disposal form” that was required to be completed when getting rid of old equipment.

Every year, Comptroller Mychajliw meets with Town Supervisors, Village Mayors and City Mayors across Erie County.  An offer is made by the Office of Erie County Comptroller to assist fellow elected leaders, regardless of political party, in any way it can.  This annual meeting with Town of Evans Supervisor Mary Hosler led to her formally requesting, in November 2016, a temporary loan and corrective action plan from Comptroller Mychajliw that put the Town of Evans back on sound financial footing.

It was during a similar meeting with Supervisor Keding at the beginning of 2018 where Comptroller Mychajliw offered to assist the Town of Boston.  That is when Supervisor Keding asked Comptroller Mychajliw to complete a review and the Town Board approved a formal resolution requesting one. As a note, the county shares over $300 million in sales tax revenue annually with local municipalities, including cities, towns, villages and schools, which creates a significant financial interest.

“When Supervisor Keding took office he knew he had a challenge on his hands. I applaud him for taking me up on my offer that my office is available to help towns in any way that we can. My team immediately went to work to help the Town of Boston in identifying weaknesses and errors.  Our recommendations will help Boston correct past errors and create a stronger town government,” concluded Comptroller Mychajliw.

For a PDF of the report, please CLICK HERE.