I am writing to provide a report and analysis of sales tax collections over the last five years.  As you are aware, sales tax is Erie County’s largest revenue.  It is also our most volatile revenue.  Many of the factors that make up the total amount we collect are completely out of our control.  Over the past few years, our geographic location to Ontario, Canada has proved positive for our overall collections.  However,  as the Canadian dollar continues to slip in value against the American dollar, we are noticing a corresponding decrease in the growth rate of our sales tax revenue. 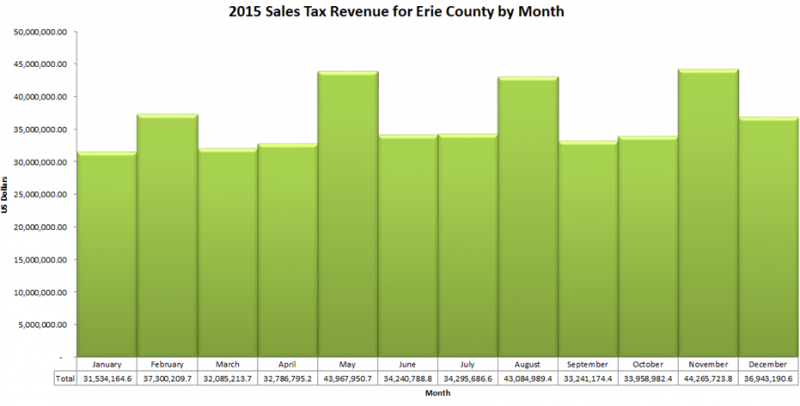 Below is a breakdown of sales tax collections between 2011 and 2015.  While the total amount collected per year continues to rise, in the last two years the growth rate has decreased.  In the last four years, sales tax revenue collections have increased $36,711,230.70.

The rate of growth from year to year has remained relatively constant but took a sharp decline in 2015.  Below are the percentages that revenue grew by with the average four year rate of growth being 2.21%.

It is important to note that the 2016 budget is balanced with an expectation that sales tax will grow by 1.53%, or an additional $6,702,543.70.  At the time the budget was presented, the average rate of sales tax growth was 2.21% and it was reasonable to assume revenues would meet that proposed threshold.  However, the value of the Canadian dollar, which directly impacts Canadian shoppers doing business here, took a sharp decline at the end of the summer and the result was a 2015 rate of growth of only 1.54%.

VALUE OF THE CANADIAN DOLLAR

Unfortunately, there is no evidence to suggest the economic conditions of the canadian dollar will improve from its current rate.  For the last two years its value has been declining, with that decline accellerating in recent months. 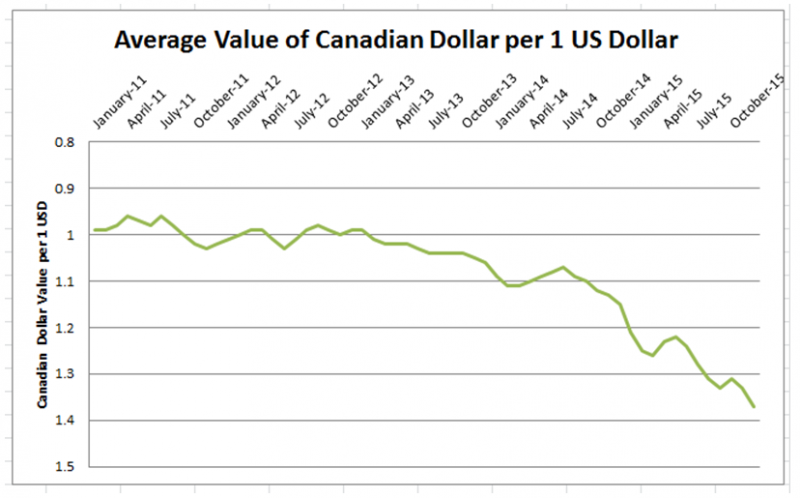 In fact, most major US and Canadian banks are forecasting that the value of the Canadian dollar against the US dollar will continue to decline throughout 2016 and into 2017.  This forecast is problematic for our 2016 budget.  Today, the Canadian dollar is valued at $1.33 against the US dollar.  Only one (National Bank) out of six major Canadian banks forecasts that to improve by the fourth quarter of 2016.  Their forecasted improvement is only a shift of one penny.  Four of six major Canadian Banks show their dollar continuing to decline in value against the US dollar in the first quarter of 2017, from its value today.  Two major banks are showing an increase in value in the first quarter of 2017, but neither improvement is substantial or impactful.

AVERAGE PRICE PER BARREL OF OIL

The EIA does forecast that the price per barrel of oil will begin to climb in the third and fourth quarters of 2016 and the first quarter of 2017.  However, that projected growth still shows oil selling at under $50 per barrel, which is not high enough to influence the value of the Canadian dollar in a way that will meaningfully impact our sales tax collections.

As the Canadian dollar declines, so do visits from Canadian shoppers.  At the same time the currency started a steep plunge late in the summer of 2015, so did cross border traffic.  According to data assembled by Visit Buffalo Niagara, overall cross border traffic is down significantly from 2014.  Additionally, there are no signs of improvement this year.  For the month of January 2016, traffic crossing the four major bridges from Canada into the United States was down 19.45%, as compared with January of 2015.  With no change in the direction of oil prices and the Canadian dollar, this trend is likely to continue through 2016.

The chart below, prepared by Visit Buffalo Niagara, indicates bridge traffic by month for 2014 and 2015.  Traffic began a sharp decline at the end of this past summer, and continues today.

The global price of oil has a major impact on the international economy and in particular the Canadian economy.  Declining oil prices caused Canada’s oil and gas industry to lose 37% of its revenues in 2015.   Canada is over dependent on this industry and its poor performance has sunk the value of the Canadian dollar to 75 cents against the American dollar.  Just a few years ago, their dollar was valued significantly higher than ours, which spurred increased cross border economic activity.  This reversal of fortunes has left Canadian shoppers at home, and Erie County sales collections are now negatively impacted.

When the last budget was put together, the average rate of sales tax growth over the four prior years was 2.21%.  The budget was balanced on a 1.53% growth rate in 2016.  Unfortunately, final collections in 2015 only yielded a 1.54% growth rate, which is nearly $9 million under budget.  There is currently no reason to believe that there will soon be drastic increases in the price of oil or the value of the Canadian dollar against the American dollar, and therefore, as legislators, the time has come to be much more vigilant and cautious about spending.