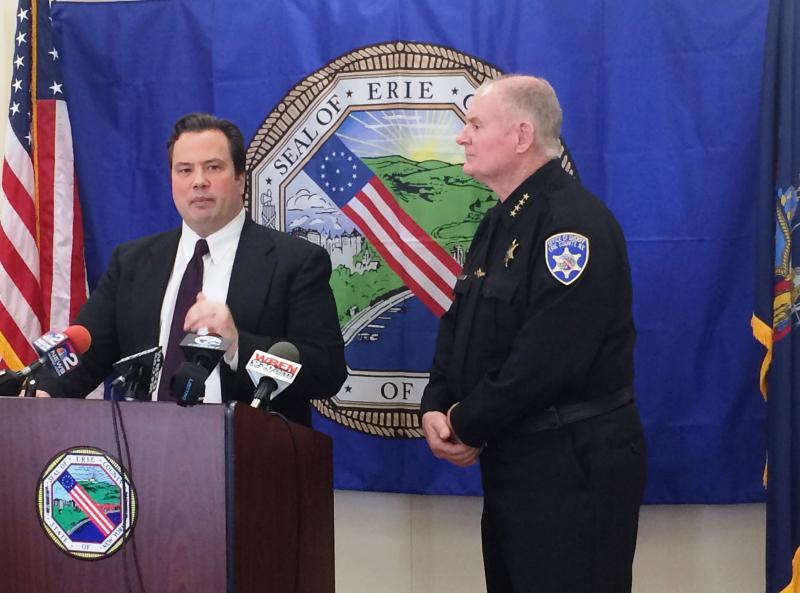 Local seniors, including the family of an Office of Erie County Comptroller
staff member, are being targeted

The grandparents of an employee of the Office of Erie County Comptroller were called by scam artists and almost victimized. Only until this individual’s family called the Rath Building and confirmed the individual’s presence at work, did they believe their loved one wasn’t behind bars.

The scammers call a family member and pretend to be their grandchild or tell them their loved one, usually a grandchild, is in police custody and that to get them out of jail they have to send money immediately. The Comptroller and Sheriff can’t stress enough that this is NOT how inmate processing works.

“These lowlifes will try anything to get money out of vulnerable seniors. They are scum for targeting the elderly. Unfortunately in some cases, they succeed. The scam known as ‘Grandchild In Need’ is making its way through our community again. Sheriff Howard and I will do everything we can to raise awareness about this issue. We will do our best to educate seniors and stop Erie County seniors from falling victim,” said Comptroller Mychajliw.

“When senior citizens are victimized by scammers, they are also robbed of their sense of trust, independence and dignity out of embarrassment and fear.  Families should be aware that names, photos and other information posted on social media are often used to complete the con.  It is vital that family members utilize all educational resources to have an open and compassionate conversation with older family members to protect them from all forms of abuse and victimization,” said Sheriff Howard.

Here are tips for taxpayers to educate themselves on Erie County’s inmate procedure:

1.      The Sheriff’s Office will NOT call someone to get money to prohibit someone from going into custody.

2.      The Sheriff’s Office maintains an active offender list on its website of everyone who is in Sheriff’s custody. That list can be found at www.erie.gov/sheriff under “Inmate Information” to see if someone you know is listed.

3.      Erie County also has an app with inmate information. It can be downloaded for Apple and Android devices. Search “Erie County NY Sheriff” in the app store.

“These scams unfortunately can cost victims thousands of dollars. Quite often there is no restitution. As for the employee in my office, their grandparent had the sense to eventually call the Rath Building and personally check on their loved one. At first they were convinced he was in trouble. They were willing to do anything to help him, including sending money. Fortunately in this case, the grandparent called. Our employee knew how to stop their grandparent from believing the scammer before it was too late,” added Comptroller Mychajliw. “We must educate our entire community to always double check the facts and to not give anyone money over the phone.”

The news recently reported that in the City of Tonawanda, a senior citizen was scammed out of $4,000. According to police reports, the victim received a call that his granddaughter was in a car accident. The caller told the victim that the granddaughter had been on her cell phone when the accident occurred and that the vehicle she struck was uninsured and she needed $4,000 to be released from police custody. The victim was instructed to get four $1,000 gift cards from Sam’s Club and call back. The victim complied and called the number back, furnishing the numbers on the card and PIN.

If you or a loved one has received a call from a scammer, please file a complaint with The Federal Trade Commission. Visit www.ftc.gov where you can fill out an online complaint form. You can also call the FTC at 1-877-382-4357 to report a complaint.

Anyone with a question can also contact the Comptroller’s Office at 716.858.8404 or email comptroller@erie.gov.

For a PDF of the Press Release, please click here.