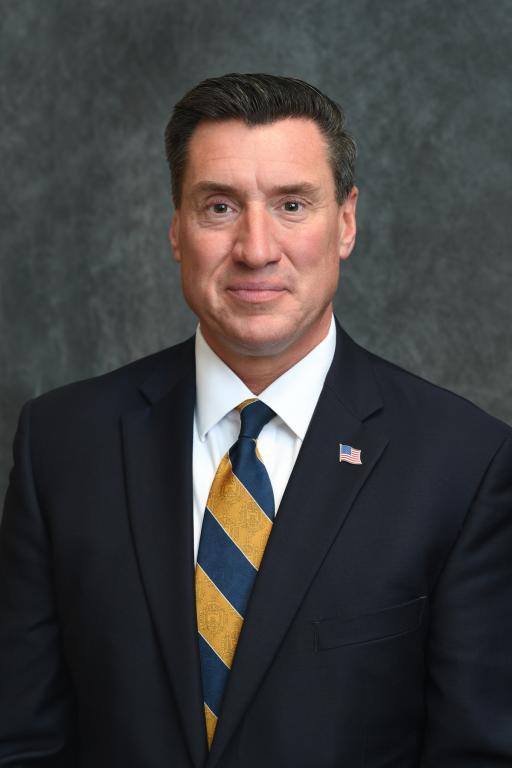 District Attorney Johnn Flynn was born and raised in Western New York. He attended Bowling Green State University and graduated with a Bachelor of Arts degree in 1988. DA Flynn joined the United States Navy after college. He attended Naval Officer Candidate School, in Newport, Rhode Island, and upon graduation he was commissioned an Ensign in the United States Navy. He then attended Navy Supply Corps School (The Navy’s Business School), in Athens, Georgia, and upon graduation was assigned to the USS CLEVELAND (LPD-7), stationed in San Diego, California. There he served as the Assistant Supply Officer deploying overseas to the Western Pacific and served during the Gulf War.

After he fulfilled his naval commitment, DA Flynn returned to Buffalo, NY and attended the University of Buffalo School of Law. While in law school he continued to serve in the Naval Reserves. Upon graduation from law school in 1995, he went back on active duty and served in the Navy Judge Advocate General’s (JAG) Corps.  He served as a Navy attorney at Pensacola Naval Air Station, in Pensacola, Florida, where he was also appointed a Special Assistant United States Attorney. He then served his final two years on active duty at the United States Naval Academy, in Annapolis, Maryland, as the Officer-in-Charge of the Office of Legal Counsel. DA Flynn was awarded the Navy and Marine Corps Achievement Medal and two Navy and Marine Corps Commendation Medals during his time on active duty.

In 2001, DA Flynn left active duty and again returned home to Western New York. He joined the Erie County District Attorney’s Office as an Assistant District Attorney. He was quickly promoted to the Homicide Bureau, where he served until leaving in 2002 to enter private law practice. DA Flynn was a personal injury attorney from 2002 to 2016. He also served as a lecturer at SUNY Buffalo State from 2009 to 2016, teaching a Moot Court class in the Political Science Department. DA Flynn continued to serve in the Naval Reserves until his retirement in 2017, reaching the rank of Commander. After re-affiliating with the reserves in 2001, he earned four additional Navy and Marine Corps Commendation Medals.

DA Flynn is also currently the President-Elect of the District Attorneys Association of New York (DAASNY). He will become President of the organization next year.

DA Flynn resides in the Town of Tonawanda with his wife, Debra, and has five children.