Erie County, NY Department of Health » Bats & Rabies—A Dangerous Combination; Do NOT Touch Any Wildlife—For Your Sake & Theirs

Bats & Rabies—A Dangerous Combination; Do NOT Touch Any Wildlife—For Your Sake & Theirs

Do NOT Touch Any Wildlife—For Your Sake & Theirs

ERIE COUNTY, NY —Erie County Department of Health (ECDOH) wants all residents to be aware of a recent increase in bat activity which increases the risk of human contact with a bat. Because bats may carry the rabies virus, it is important to avoid any physical contact with a bat.

Rabies is a virus that affects the nervous system in humans and other mammals. A person may contract rabies from an infected animal bite, scratch, or saliva exposure. Rabies infected wildlife, such as bats and raccoons, carry rabies and transmit infection, without necessarily a bite. A bat bite or scratch may not be seen or even felt by the injured person due to the small size of its teeth and claws. A potential rabies exposure should never be taken lightly.

“Even a minor scratch or simply touching an infected animal may be enough to transmit the rabies virus from animal to human,” stated Erie County Health Commissioner Dr. Gale Burstein. “Bat bites may not be noticed because bat teeth are very tiny and razor sharp and may be no larger than a needle prick. ANY direct contact with a bat or other potentially rabies infected wildlife should be considered a possible rabies exposure. Erie County residents should contact ECDOH for advice about possible rabies exposure. Since rabies is nearly always fatal, it is important to take aggressive precautions to prevent the development of disease.”

Every year, bats and other wildlife test positive for rabies in Erie County. A healthy bat typically avoids any contact with humans/animals and will not be found resting on the ground. Rabid bats frequently lose their ability to fly, and may be found on the ground or in water, making them more likely to come into contact with people or pets. Bats with rabies are often disoriented, increasing the likelihood that they end up inside a dwelling by accident.

If you find yourself in close proximity to a bat, dead or alive, do not touch, hit or destroy so the bat’s brain can be preserved for rabies virus testing. Those who wake up to find a bat in the room, or a bat in the room of an unattended small child, an intoxicated or mentally incapacitated person, or a family pet, the possibility of a bat bite, scratch -- or direct contact -- may have occurred.

“Bats should be captured if there has been direct contact with a person or pet, or if the bat was found in the vicinity of someone who might have been exposed. Once the bat is captured, they may need to be tested for rabies infection,” stated Peter Tripi, Senior Public Health Sanitarian.  “If the bat is available for testing and test results are negative, preventive treatment will not be needed. “Do not release a live bat or throw out a dead bat that has bitten or scratched, or had direct contact with a person or pet, unless the ECDOH has told you that it will not be necessary to test the bat.”  Keep the bat and call Environmental Health (716-961-6800) to make arrangements to bring the bat to the ECDOH (if testing is deemed necessary).

How to Safely Capture a Bat:

1.       Never handle a bat with bare hands. Wear thick gloves to pick up a dead or injured bat or pick up the bat with a shovel or dust pan.
2.       For a live bat, wait until the bat has landed. Place an empty can or wastebasket over the bat and slide cardboard underneath to contain the bat.
3.       If the bat is still flying, try gently striking it with a broom or tennis racket in order to knock it down, or try to capture it in a net.
4.       Use heavy gloves (like leather work gloves) and place the bat in a sealed can or jar, or in a plastic bag that is within another heavy-weight plastic bag such as a zip-lock bag. For a live bat, punch small holes (less than ½ inch in diameter) in the container(s) for the bat to breathe. Place the container in a quiet area away from heavy human traffic. Do not refrigerate, freeze or kill a live bat.
5.       Dead bats that will be sent to a laboratory for testing should be refrigerated (not frozen) until the laboratory can begin testing. Do not refrigerate, freeze or kill a live bat. 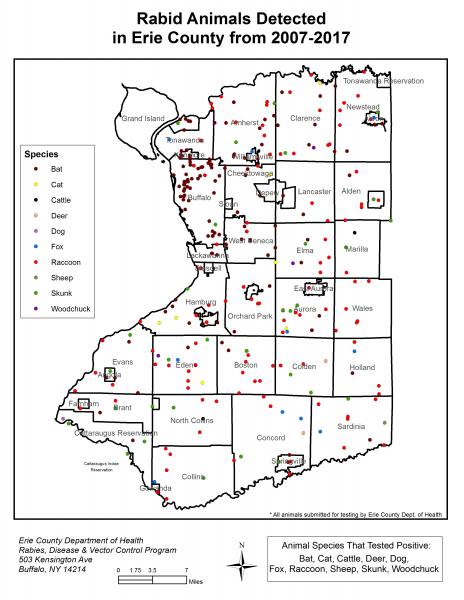 If your pet is involved with a suspected rabid animal, do not handle the pet with bare hands following the incident. There is a possibility to get the pet’s saliva on your hands. Wait a few hours, and then bathe the animal while wearing protective gloves. All pets should be vaccinated against rabies, BOTH indoor and outdoor cats, plus any other animals that live on your property, such as barn cats or feral cats in trap and release programs.

If you find an obviously injured wild animal, call a wildlife rehabilitator for advice, such as the Wildlife Department of the SPCA serving Erie County (716-875-7360) or the New York State Department of Environmental Conservation’s (“DEC”) Regional Wildlife office to locate a wildlife rehabilitator in your area (716- 851-7010). Do not handle wildlife!

Centers for Disease Control and Prevention--Bats