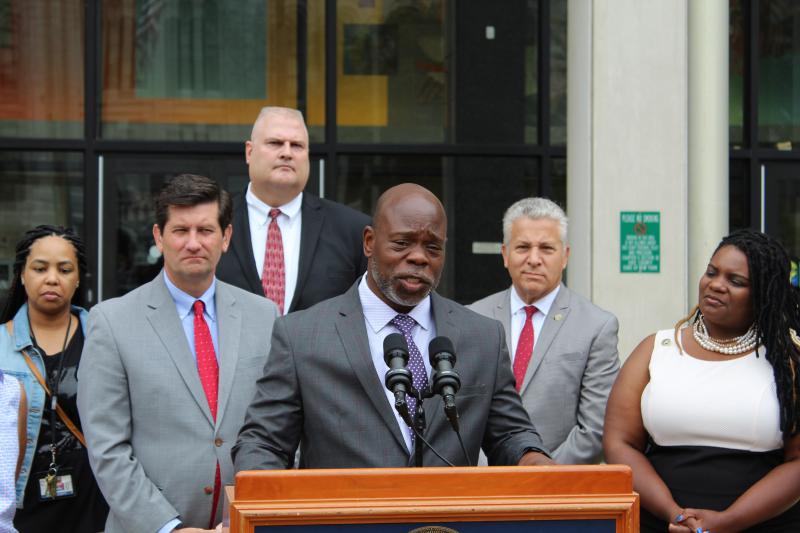 At Thursday’s Public Safety Committee Meeting, Johnson heard testimony from representatives of the Sheriff’s Office regarding the process to purchase body cameras for road patrol officers. The legislature, led by Chairwoman Baskin, has been pushing for the adoption of cameras since the release last year of footage from an incident involving the use of force at a Buffalo Bill’s game in 2017. Erie County Sheriff Timothy Howard has resisted the implementation of a body camera program, so the legislature put together an initial funding package of $600,000 for the purchase of cameras and launch of the program. The legislature unanimously approved the funding in April, and directed the funds to the Department of Information and Support Services (DISS), which is the department that handles all technology needs for Erie County.

Although the Sheriff’s Office issued a request for proposals (RFP) for a vendor to supply the cameras, Sheriff Howard insisted that they could not fulfill the legislature’s demand for a body camera program unless the funds were given to the Sheriff’s Office. The issue came to a head at Thursday’s Public Safety Committee meeting.

“It was essential to reach an understanding with the Sheriff’s Office,” said Legislator Johnson. “The public has demanded body cameras and the legislature was unanimous on the decision to fund them and to ensure that DISS was part of the process. The meeting was contentious at times, but we are moving forward.”

“I am pleased that we reached an understanding with Sheriff Howard on this issue,” said Baskin. “The legislature has been in unanimous agreement for the need for body cameras, and the delay in implementing the program has been frustrating. I am confident that we have resolved this impasse, and that road patrol deputies will be supplied with body cameras before the end of the year.”

When Erie County Chairwoman Basking was first sworn into office in 2018, she vowed to take on the County's complex and flawed criminal justice system. She hosted a 2018 community Criminal Justice roundtable series that  identified a number of reform measures. These included a push for the adoption of cashless bail for misdemeanor offenses in New York State, the need for professional oversight from community representatives into the operation of Erie County’s jails, calling for special prosecutor to review the death of former inmate India Cummings and the implementation of a body camera program for Erie County Sheriffs. It was a heavy platform but the Democratic Majority has implemented Baskin's reforms.

The legislature marked another milestone last week, with a ceremonial signing of legislation that will create an advisory board to oversee the Sheriff Office's Jail Management Division. The new board Erie County Corrections Specialist Advisory Board (ECCSAB) will be made up of 11 voting members, who are residents of Erie County but do not hold an elected position.This board will  provide robust oversight, with experts and specialists in criminal justice, public safety and restorative justice.

Board members would be appointed by the majority and minority leaders of the legislature, as well as the head of the Legislature and the sheriff. The Erie County Executive would appoint a member, as would the commissioners of the departments of Probation and Mental Health. Community organizations would also appoint members, and there will be at least one seat set aside for someone who has been incarcerated.

“This has been my number one priority since taking office,” said Baskn. “As soon as I began to explore criminal justice reform in Erie County, the need for an advisory board was raised. Community leaders pointed to the Citizen Advisory Board as a starting point, but it was clear that we needed something with real teeth. I am most proud of the fact that the ECCSAB is chartered under a local law, will which will insure that it is in place, regardless of who is in charge of the Erie County Legislature.”