Legislator Lorigo » Hero honored for saving truck driver on I-90

Hero honored for saving truck driver on I-90 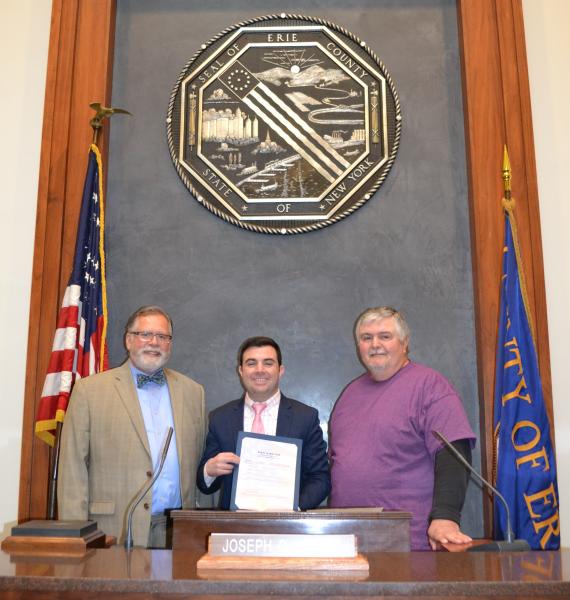 The Erie County Legislature honored West Seneca resident Ed Brunner at the March 26, 2015 session in recognition of his efforts to save the life of Larry Coulter. Mr. Brunner’s quick thinking and disregard for his own safety lead to Mr. Coulter being freed from the cab of his burning dump truck after crashing on Interstate 90 on March 16. Mr. Brunner was presented with a County Proclamation recognizing his heroism. 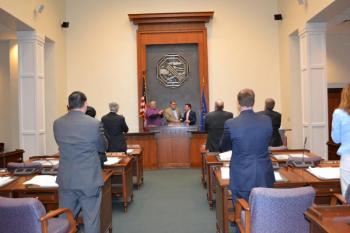 As a result of the accident, Mr. Coulter was trapped inside the truck, which was leaking gasoline, on fire and soon would become fully engulfed in flames. Not knowing when the truck could explode, Mr. Brunner risked his life and refused to retreat and continued his efforts to smash a window and free Mr. Coulter. Unable to stand close enough to the truck to smash the window with a tire iron, Mr. Brunner resorted to heaving heavy pieces of concrete at the window. He was finally able to crack the glass, allowing Mr. Coulter to kick the window out. Mr. Brunner then helped him escape as flames surrounded them both. The men miraculously walked away without serious injury. The fire caused the Thruway to shut down for an extended period of time.

“Edward Brunner had no way of knowing if he and Larry would be standing here today when he repeatedly attempted to rescue the trapped truck driver. Despite the intense scene developing around him, Ed did not quit until Larry was free and both men were out of harm’s way. He refutes the title but Ed is a hero by every definition of the word. It is a privilege to recognize him and thank him for going above and beyond to help a neighbor in need,” said Legislator Lorigo, who presented the proclamation during session. “This is just an incredible story, one that amazes me every time I read about it, knowing it is impossible for us to understand the difficult circumstances both men faced as they focused solely on living through it.”