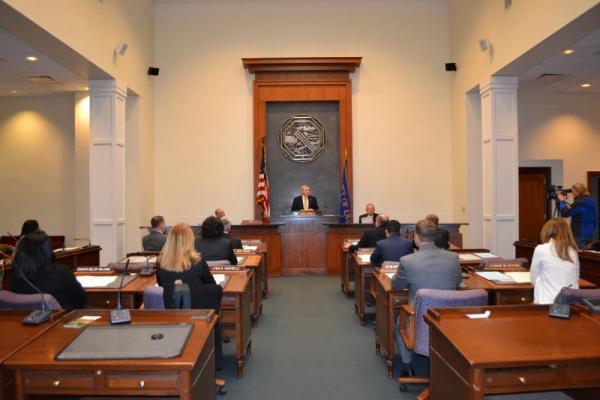 The Erie County Legislature is being led by a Republican majority for the first time in 36 years and the members elected Legislator John Mills as chairman for 2014 during the annual re-organizational meeting held on Jan. 2 at Old County Hall.

“I am honored to have the support of my colleagues and look forward to leading the Legislature this year. This change in leadership will bring about increased accountability and improved services for the residents of Erie County. There will be many noticeable changes in the Legislature and throughout the county,” said Chairman Mills. “The Majority Caucus is committed to working with the administration to ensure that every action taken is in the best interest of taxpayers. Nothing will be passed through this body without due process and discussion. The Legislature has lacked this level of responsibility for too long and I am pleased to lead the effort to deliver a better county to the residents.”

Legislator Mills ran unopposed in this past campaign and is beginning his fifth term as an Erie County Legislator, representing the 11th District. For the past seven years he has served as Minority Leader.

Majority Leader Lorigo received the unanimous support of the caucus and is the first member of a minor party to hold the position in the Legislature’s history.

“I am honored to have the support of my colleagues to serve as leader of the new Majority Caucus. Our members work incredibly hard on behalf of the taxpayers to provide quality services while controlling spending and taxes. This year the Legislature will refocus its priorities and ensure that every tax dollar spent is done so appropriately,” said Majority Leader Lorigo.