11/16/12: Poloncarz Joins in Official Designation of Veteran's Park in Wales 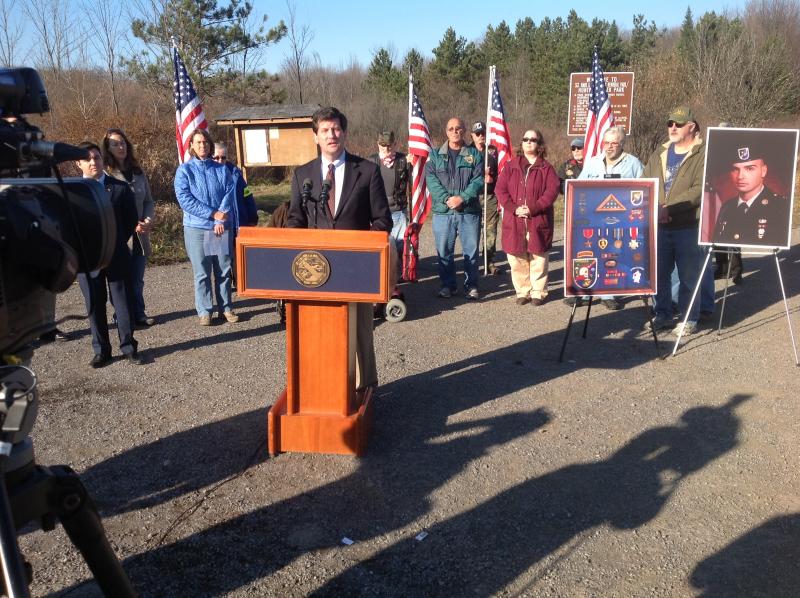 “It is an honor to be here today to recognize the service and valor of Sgt. Mark Rademacher, and to join his family at this place that he loved so much to right a past wrong by unveiling a sign that should have been installed nearly 30 years ago,” said Poloncarz. “His service to our country will never be forgotten, his memory will never fade away, and for as long as beautiful natural spaces like this Memorial Park are with us, he will be with us.”

Sgt. Rademacher, the son of a World War II veteran and one of several siblings and family members serving in the military, was a 1981 graduate of Iroquois High School. An avid outdoorsman, he spent many hours hunting, trapping, and hiking in the woods at Hunter’s Creek Park, as well as conducting personal training there in preparation for his upcoming military service. After graduation, Rademacher went into the Army and after basic training became an Army Ranger. While a Ranger he also became a Jungle expert, Expert marksman, and competed in the Best Ranger Competition.

“Mark knew at an early age what it was he was going to do after high school. He was the youngest of 10 children born and raised here in Wales Center, and he hiked all the trails and climbed the ravines here while he was growing up,” said Jane Rademacher, Sgt. Rademacher’s sister. “My parents were always so proud of Mark. This is a very special place for a lot of people, and we are thankful to be here today.”

Serving with A Company, 1st Ranger Battalion during “Operation Urgent Fury”, Sgt. Rademacher was killed in action when he and other members of his “Jeep Team” were ambushed by Cuban forces while en route to secure an area. Despite a valiant fight, all but one of Sgt. Rademacher’s team were killed that day. Sgt. Rademacher was awarded the Purple Heart and Bronze Star, as well as the Conspicuous Service Award from the State of New York.

“Today I am honored to be a part of this well-deserved recognition of Sgt. Mark Rademacher, who paid the ultimate price on October 25, 1983 during combat operations in Grenada,” said Legislator Lorigo. “Here in this park, named in his honor, his hometown will forever remember him for his service to his country.”