ERIE COUNTY, NY— Today, Erie County Executive Mark C. Poloncarz was joined by Director of the Erie County Veteran Services Agency Fran McLaughlin and City of Lackawanna Mayor Geoffrey Szymanski at the American Legion Matthew Glab Post #1477 to present eight military service medals to Mrs. Rita Dudczak of Lackawanna, the daughter of Mr. Vincent Mikolajczyk. The medals, which include a Purple Heart and Bronze Star, were awarded posthumously following Mr. Mikolajczak’s service in the United States Army in World War II. The medals had been discovered in an unused filing cabinet at the Edward A. Rath county office building earlier this year and were presented to Mrs. Dudczak following a long period of investigation as the Veterans Service Agency sought to return them to their rightful owner. 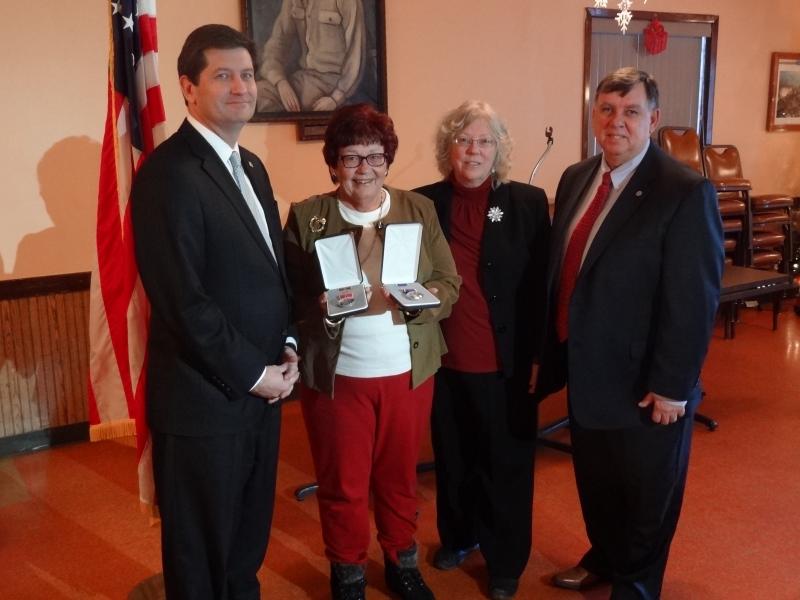 “I am pleased to return these medals to Mrs. Dudczak, and I would like to thank Director McLaughlin for the exhaustive work he did in locating her and confirming that Mr. Mikolajczak was indeed her father. He was a highly-decorated veteran and it is very appropriate that these honors now go to his surviving family,” said Poloncarz. “We are proud of our veterans and it is an honor to be here today to present these medals. They represent service, courage, and sacrifice on Mr. Mikolajczak’s part, and on behalf of Erie County I thank him for his service.”

In addition to the Purple Heart and Bronze Star, the medals presented to Mrs. Dudczak included the Good Conduct Medal; Army of Occupation Medal; American Campaign Medal; American Defense Service Medal; European-African-Middle Eastern Campaign Medal; and World War II Victory Medal. How the medals came to be in Erie County’s possession is unknown at this time, although it is thought that Mrs. Dudczak’s brother George, himself a veteran of the United States Air Force, had requested the medals for his father but passed away prior to their delivery. Mrs. Dudczak’s mother, Frances, was also a veteran, having served as a WAC in World War II. Additionally, her husband Thomas and two brothers-in-law are veterans as well.

“In the U.S. Armed Forces, we will never leave a fallen comrade and we don’t leave anyone behind. It’s one of the basic pillars of what the Army calls the ‘Warrior Ethos’”, said Director McLaughlin. “So when these Medals came into our possession I knew what we had to do. These medals belong to this soldier’s family and we were going to do everything possible to locate the soldier who earned them or his family and return the medals.”

Rita Dudczak added, “I wish my father was alive to receive these medals, they meant so much to him. This is so important to our family and it will mean a lot to his grandchildren and great-grandchildren. My father and all those who served in World War II made our lives better and fought for our freedom. They fought to make a better life for their families and their country, just like all those young men and women are doing now overseas.”