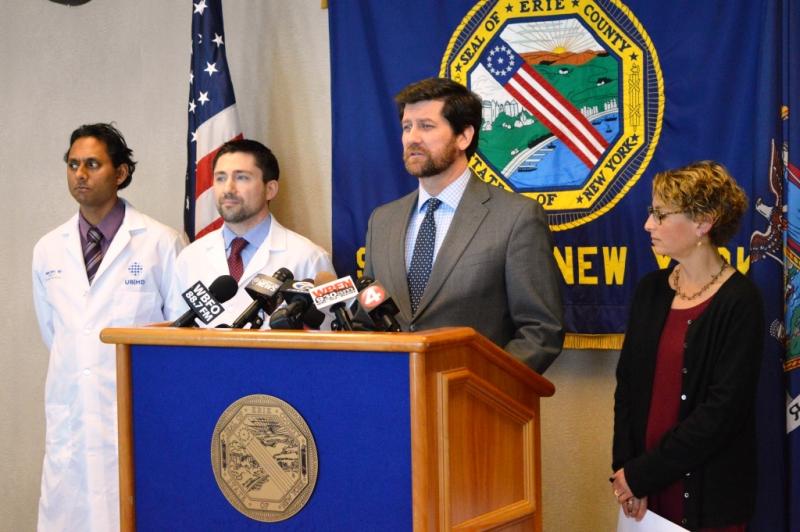 Erie County Executive Mark C. Poloncarz (at podium) is joined by (L-R) Dr. Shamim Islam and Dr. Stephen Turkovich of Women & Children’s Hospital of Buffalo and Erie County Health Commissioner Dr. Gale Burstein to discuss the importance of measles vaccinations in stopping the spread of the disease. A recent nationwide outbreak of measles has brought new attention to the need for vaccination to protect public health.

ERIE COUNTY, NY— Erie County Executive Mark C. Poloncarz was joined today by Erie County Health Commissioner Dr. Gale Burstein, Chief Medical Officer of Women & Children’s Hospital of Buffalo Dr. Stephen Turkovich, and Dr. Shamim Islam, MD, DTM&H of the Division of Infectious Diseases at Women & Children’s Hospital of Buffalo to discuss the importance of measles vaccinations in stopping the spread of the disease. A recent nationwide outbreak of measles has brought new attention to the need for vaccination to protect public health and safety, with Departments of Health nationwide recommending that residents check with their healthcare provider to ensure that they and all of their family members have current immunizations.

“Immunizations are a critical component in keeping the public safe from measles, and every un-vaccinated person presents a potential risk to the people they come in contact with,” said Poloncarz. “Protecting yourself through immunization is the safest and most responsible action an individual can take to prevent measles and adds to the overall protection of our community. Choosing not to vaccinate is not acceptable and puts everyone’s health at risk.”

Measles was declared eliminated in the United States in 2000, which means it is no longer native to the United States but continues to be brought back by international travelers. Public health officials suspect that an unvaccinated person who was infected overseas and then returned to the United States was the most likely source of the recent outbreak. The last active case of measles in Erie County was identified in 2010.

“Measles is a serious, highly contagious disease that is not just limited to young children. Although measles is usually considered a childhood disease, it can be contracted at any age,” advised Health Commissioner Burstein. “While many Erie County residents have likely already received measles vaccinations, with the recent nationwide outbreak at the highest level in years, the Department of Health is taking the opportunity to urge everyone to check with their healthcare provider to make sure their   immunizations are up-to-date. Unfortunately, measles is resurgent today primarily because of the growing number of people who refuse to vaccinate their children or delay those vaccinations.”

Vaccination is the single best way to prevent measles. Individuals should receive 2 doses of Measles, Mumps, and Rubella (“MMR”) vaccine to gain protection.  The first dose should be given at 12-15 months of age and the second dose is routinely given at 4 to 6 years of age, but may be given as soon as 28 days after the first dose. Anyone at any age who is not immune to measles, and has no condition that would prohibit receiving the vaccine, should receive 2 doses of MMR vaccine at least 28 days apart.

Children less than twelve months old typically are not vaccinated because their immune systems are not ready. And some people, children and adults alike, cannot be immunized for medical reasons. That makes both groups extremely vulnerable to the measles virus.

Burstein added, ““People infected with measles can spread the disease to others from four days before to four days after the rash appears, so a returning traveler could spread the disease and not even know it. Also, because measles is circulating all over the world, a traveler could get infected almost anywhere. Measles is highly contagious with a 90 percent chance of infection among people who are exposed who are not immune. Measles can spread through coughing and sneezing. The measles virus can live for up to two hours on a surface or in an airspace where the infected person coughed or sneezed, even after the infected person has left the room.”

Measles symptoms generally appear in two stages. In the first stage, which last two to four days, the individual may have a runny nose, cough and a slight fever. The eyes may become reddened and sensitive to light while the fever gradually rises each day, often peaking as high as 103° to 105°F. Koplik spots (small bluish white spots surrounded by a reddish area) may also appear on the gums and inside of the cheeks. The second stage begins on the third to seventh day and consists of a red blotchy rash lasting five to six days. The rash usually begins on the face and then spreads downward and outward, reaching the hands and feet. The rash fades in the same order that it appeared, from head to extremities. Other symptoms include weight loss, diarrhea and enlarged lymph glands throughout the body.

Fatalities from measles are currently rare in the United States, but one or two of every 1,000 children who contract measles will die from the disease. It is particularly harmful to persons with immunosuppression, pregnant women and very young children. More common complications include pneumonia, encephalitis (swelling of the brain) and deafness. Pregnant women who get the measles may give birth prematurely or deliver low-birth-weight babies. Measles kills an estimated 164,000 people around the world yearly, and there are an estimated 20 million cases worldwide.

On the Erie County Department of Health, visit   http://www2.erie.gov/health