ERIE COUNTY, NY— Erie County Executive Mark C. Poloncarz was joined today by Buffalo Mayor Byron Brown, members of the Jewish Federation of Greater Buffalo, and leaders of the Jewish community in a candle lighting ceremony commemorating Yom Hashoah, or Holocaust Remembrance Day.  The County Executive and Mayor also issued a joint proclamation declaring April 15-22, 2012 as the days of remembrance of the Victims of the Nazi Holocaust in Buffalo and Erie County. 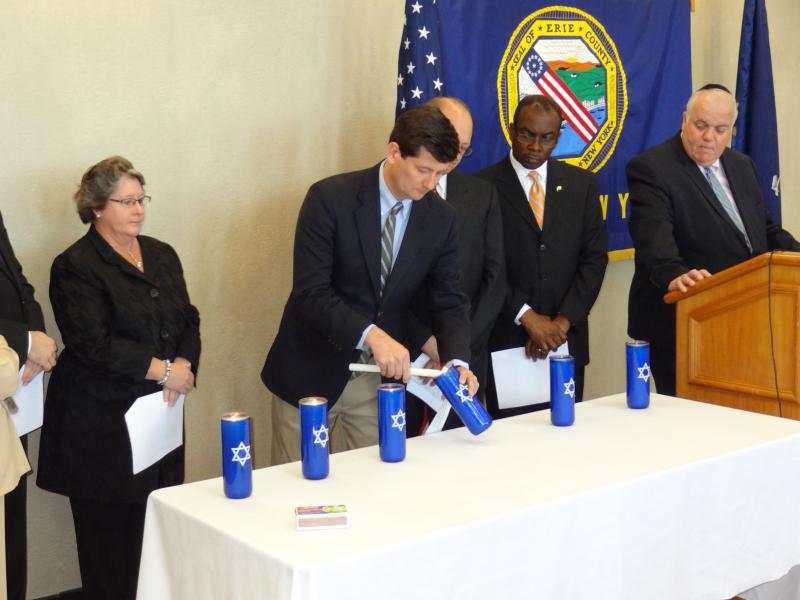 “While I am not Jewish, I have a relative who died at the concentration camp at Auschwitz,” said Poloncarz. “We are here today to remember the millions of victims of the Nazi Holocaust, to make sure that each new generation never forgets, and to reaffirm that we must be on guard so that this never happens again.”

The ceremony included the lighting of 6 candles, each one representing a million Jews who were murdered.  Joining Poloncarz and Brown in lighting candles were Holly Levy, President of the Jewish Federation of Greater Buffalo; Rabbi Gary Pokras, Temple Beth Zion; Deborah DiMatteo, Vice President of M&T Bank; and Dan Kester, lighting a candle in memory of his father.  The lighting of each candle was accompanied by a short commemorative reading.

Israel’s Knesset originally established Yom Hashoah as a day to memorialize the 6 million Jews who died at the hands of the Nazis from 1933-1945.  Ceremonies marking the occasion were held on the 27th day of the month of Nisan, which marks the day when Allied troops liberated the first Nazi concentration camp at Buchenwald, Germany in 1945, and is also the first month of the ecclesiastical year in the Jewish calendar.  Countries around the world include memorial services, poetry readings, lectures, and musical presentations as part of their own observances.