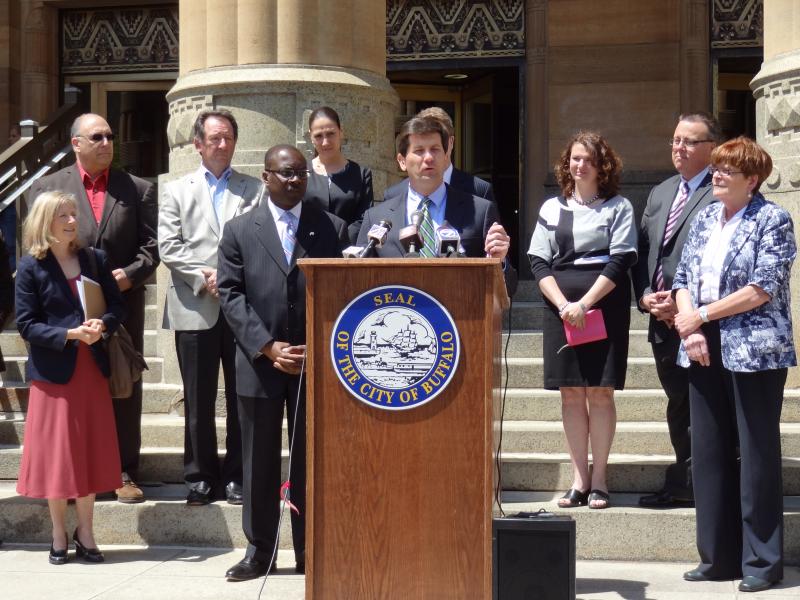 "With the announcement today, the Governor has added a significant weapon to Buffalo's arsenal for ridding the City of vacant and abandoned property,” said Mayor Brown.   “Further, the City of Buffalo looks forward to working with Erie County, the cities of Lackawanna and Tonawanda as well as all of the other towns and villages on an issue facing the entire region."

“Municipalities all across Erie County have been dealing with a growing problem of vacant, abandoned, and tax-delinquent properties. Now, thanks to Governor Cuomo and the Empire State Development Corp., Erie County will be one of the first counties in New York State to apply a land banking solution to this problem,” said County Executive Poloncarz.  “I look forward to working with partners in the cities of Buffalo, Lackawanna, and Tonawanda, as well as other municipalities, to apply a regional approach to the problem.”

Lackawanna Mayor Geoffrey Szymanski stated, “Land banking is going to transform the Lackawanna landscape by letting us ‘fight blight’ on two fronts. We will now be able to catch properties going through foreclosure before they become dilapidated, and also stop the spread of blight by addressing those properties that are too far gone to save.”

This new land bank, called the Buffalo Erie Niagara Land Improvement Corporation, will soon create a one-stop-shop for dealing with distressed properties. It will help speed up the process for converting vacant, abandoned, and foreclosed properties. It will also provide maintenance services for vacant lots, and pay for demolition of some structures.

In Erie County, there’s an excess of 73,000 tax liens, which have a value of $53 million in taxes owed. The land bank could help recoup those losses. While the City of Buffalo is often the focal point of the issue of abandoned properties, it is not the only community in the County that is suffering from the blight and disinvestment in real property. For instance, although the City is the location of approximately 64% of the tax delinquent properties (46,883 out of 73,360), the City has only 11% of the assessed value of all liens (approximately $6 million).”

Mayor Brown added, “This land bank will be one of the most important and effective tools in combating the abandoned property program, while improving the quality of life in city neighborhoods and creating new opportunities for business investment.”

As per the agreement, the land bank will have an 11-member board, consisting of five city representatives, three county representatives and one each from Lackawanna, Tonawanda and Empire State Development, the state’s economic development agency.

With the agreement, in addition to the 3 cities, the land bank will be able to address properties in the County’s 25 towns and 16 villages.

Village of Angola Mayor Howard “Hub” Frawley: “It is our hope that by redeveloping vacant, abandoned, and tax-delinquent properties, we will revitalize communities across Erie County and transform our neighborhoods through economic development.”

Town of Cheektowaga Supervisor Mary Holtz: “With the strong leadership of County Executive Poloncarz, we are finally able to take this very important step. Approval of this landbank initiative will provide a clear plan for the management and reuse of vacant and abandoned properties.”

Joe Maciejewski, Erie County Director of Real Property Tax Services: “The awarding of one of the first land banks in New York state is testament to the theory that united we stand, divided we fall. In a matter of a few short months, the County, Cities, Towns and Villages came together to prepare a first-class application. As the County of Erie’s Tax Enforcement Officer and now member of the Buffalo Erie Niagara Land Improvement Corporation Board of Directors, I am excited to add another “tool” to assist officials in the fight against blight.”

Michael Clarke, Executive Director Buffalo LISC: “We are very pleased that Empire State Development approved the Erie County application for the formation of the Buffalo Erie Niagara Land Improvement Corporation. With County Executive Poloncarz’s leadership and the strong support of Mayors Brown, Pilozzi, and Szymanski, our community demonstrated the kind of regional cooperation that will serve to make the land bank a success, and it’s an effort that is being justly rewarded by New York State.”