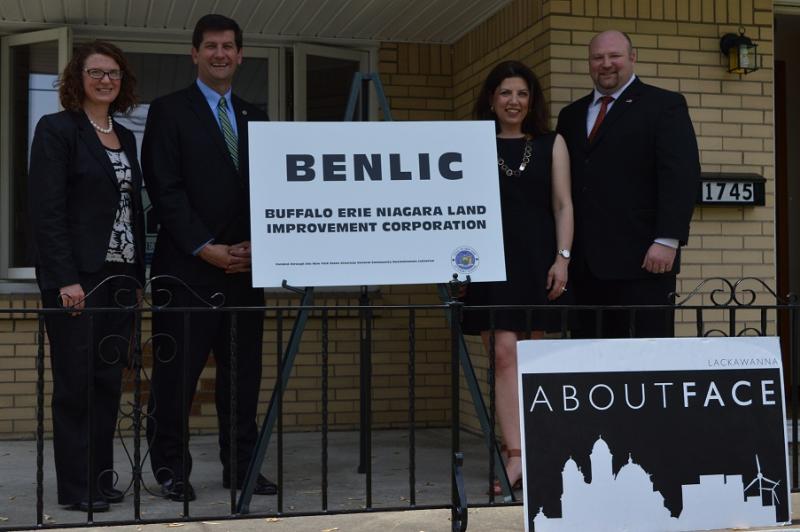 ERIE COUNTY, NY— The Buffalo Erie Niagara Land Improvement Corporation (“BENLIC”) has announced the completion of rehabilitation work at a tax-delinquent property at 1745 Abbott Road in Lackawanna, marking the occasion with the removal of a “lock box” that had secured the property for years and prevented trespassers and potential vandalism. Erie County Executive Mark C. Poloncarz was joined by Deputy Erie County Executive and BENLIC Board Chair Maria Whyte, City of Lackawanna Mayor Geoffrey Szymanski, BENLIC Executive Director Jocelyn Gordon, and Lackawanna City Assessor Frank Krakowski today to officially remove the lock box and review the property prior to its’ sale.

“Much like other abandoned properties in communities around Erie County, this house blighted the neighborhood and detracted from the efforts of other homeowners to beautify and invest in their own properties. Thanks to the efforts of the Land Bank, this property has been rehabilitated and is now ready to go back on the market and back on the tax rolls,” said Erie County Executive Mark C. Poloncarz. “Abandoned homes and the myriad problems they present are too big for any one municipality to handle alone, but thanks to the efforts of the BENLIC with vital assistance from NYS Attorney General Schneiderman, no one community has to shoulder this burden alone.”

BENLIC’s acquisition and rehabilitation of the home was made possible with funds from New York State’s Office of the Attorney General’s Community Revitalization Initiative (“CRI”). Announced by Attorney General Eric Schneiderman in June 2013, the CRI has provided $33 million in funding to land banks across NYS that are working at the local level to rebuild and revitalize their communities. In the first round of funding, which took place in October 2013, $13 million in funding was disbursed to eight land banks, one of which was the BENLIC.  As part of the CRI, the Abbott Road property will be sold to a qualified moderate-income homebuyer.

“I’m proud to support the BENLIC, one of the ten land banks statewide that my office is currently funding,” said New York State Attorney General Eric Schneiderman. “Land banks are a powerful tool to empower communities to rebuild their own neighborhoods, and the BENLIC is no exception, working tirelessly to revitalize Buffalo as well as in Erie County following the foreclosure crisis. I look forward to continuing as their partner in this endeavor.”

Deputy Erie County Executive and BENLIC Board Chair Maria Whyte added, “This story represents what our Land Bank is supposed to be about - eliminating blight and improving neighborhoods one house at a time.  The impacts will be significant and long lasting.”

“Our mission includes returning property we acquire to productive use and leaving property in better shape than we found it”, said Jocelyn Gordon, Executive Director of BENLIC.  “This fine brick home languished in tax delinquency for years and has been an eyesore in an otherwise well-kept neighborhood.  Our Land Bank enables the City to get these properties back on the tax rolls.”

“Once we acquired the property, our first step was to engage a licensed local realtor to help us determine strategic improvements to make the property safe, livable and marketable. Next, we hired exclusively local contractors to complete those improvements. The final step will be engaging a realtor to market the property to qualified potential buyers,” Gordon concluded.

BENLIC Board Treasurer and Lackawanna City Assessor Frank Krakowski enthusiastically added, “We could have sold this house to a private investor at the public auction, but there were no guarantees.  Investors often buy these properties at auction, add no value, and rent them out for large sums.  Two years from now, we could be back in the same situation with tax delinquency.  With BENLIC we were guaranteed a good outcome.”

The tax-delinquent Abbott Road property had stood empty for nearly seven years before being acquired by the BENLIC at public auction in the fall of 2014. The Corporation estimates a final total rehabilitation cost of approximately $45,000 for the project, including all hard and soft costs. The BENLIC will utilize proceeds from the sale of the property to rehabilitate other properties in BENLIC’s existing inventory, including newly-acquired homes, or towards other land bank projects.