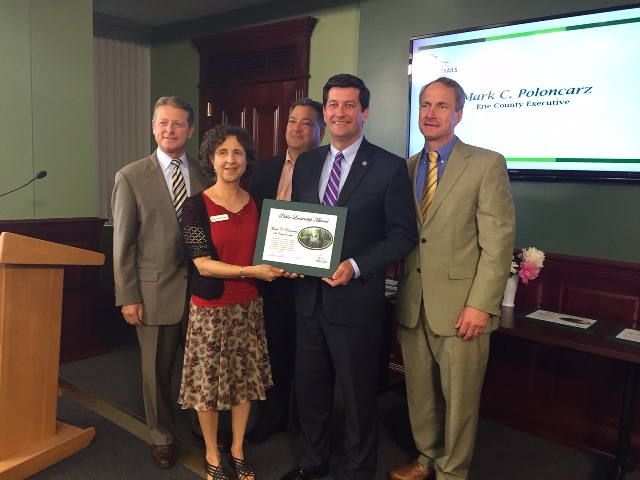 ERIE COUNTY, NY— Erie County Executive Mark C. Poloncarz was honored today by Parks & Trails New York, a statewide parks and trails advocacy organization, as he received a 2015 Park & Trail Hero Award at a ceremony in Albany. The County Executive was honored with a Public Leadership Award for his commitment to restoring and enhancing Erie County’s 10,000-acre Parks System.

“We are charged with protecting, preserving, and enhancing our Parks for today and for the next generations to come. As public officials and private citizens, we must all do what we can today to ensure that tomorrow our children and grandchildren can enjoy the natural spaces we are entrusted with,” said Erie County Executive Mark C. Poloncarz. “It is an honor to receive the 2015 Park & Trail Hero award, and to be joined here by individuals from across New York who share that commitment.”

“Volunteers, public officials, and non-profits across New York are the driving forces behind our state’s extensive network of trails and parkland but rarely do these individuals and organizations receive the recognition they so richly deserve. We are pleased to honor these efforts with our 2015 Park & Trail Hero Awards,” said Parks & Trails New York Executive Director Robin Dropkin.

Erie County’s 10,000-acre Parks System consists of 9 parks, 4 natural habitat areas, 2 beaches, and 2 golf courses, as well as other forestry lots and conservation areas enjoyed by county residents free of charge throughout the year. Since 2012, Poloncarz has invested over $5.6 million in capital projects in Erie County parks, with an additional $4 million slated for 2015 to restore and improve these natural spaces and the hundreds of buildings, roads, and other infrastructure they contain.

The biennial Park & Trail Hero Awards recognize the leadership, creativity, and donations of time, talent, and resources that improve parks across New York. Two awards are presented in the categories of Public Leadership, Volunteer Service, and Get Outdoors. In addition to Poloncarz, a Public Leadership Award was presented to Cheryl Longyear, Historian for the Town of Montezuma in Cayuga County, for her work in the development of a trail system in the Montezuma Heritage Park.