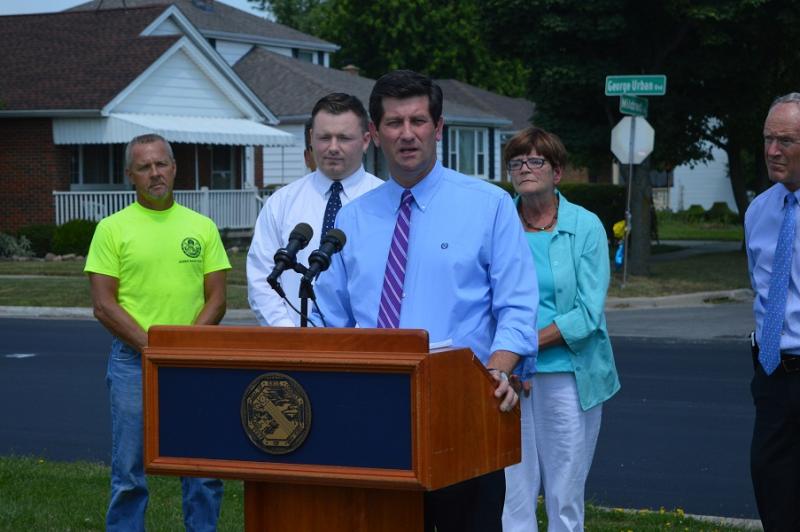 Erie County Executive Mark C. Poloncarz (at podium) is  joined by Erie County Legislator Patrick Burke (7th District), Town of Cheektowaga Supervisor Mary Holtz, and members of the Erie County and Town of Cheektowaga Departments of Public Works to review the recently-paved George Urban Boulevard in Cheektowaga. Paving work on the 1.6 mile stretch between Harlem and Union Roads was begun on Monday, July 20 and completed by Friday, July 24.

ERIE COUNTY, NY—Today, Erie County Executive Mark C. Poloncarz was joined by Erie County Legislator Patrick Burke (7th District), Town of Cheektowaga Supervisor Mary Holtz, and members of the Public Works Departments from both Erie County and the Town of Cheektowaga to review the recent paving work on George Urban Boulevard in the Town. A complete mill and overlay operation on George Urban, an important connector route between Harlem and Union Roads, removed 3.5 inches of asphalt and replaced it with fresh materials. Improvements such as ADA-compliant sidewalks were also included in the 1.6 mile project, which began on Monday, July 20 and was completed by Friday, July 24, with only road striping remaining to be done. Approximately 8,000 vehicles use George Urban Boulevard daily.

“Erie County’s infrastructure continues to be a top priority for my administration, and we are conducting nearly $30 million in road work and improvements across the county in 2015. George Urban Boulevard is a highly-traveled route that was in need of resurfacing to accommodate the large amount of vehicular traffic that uses this road every day, and both residents and motorists alike will appreciate the smooth drive they’ll now experience here,” said Erie County Executive Mark C. Poloncarz. “Working with partners in the Legislature such as Legislator Burke, as well as cooperating whenever possible on road projects with municipalities, we will continue to strive to provide Erie County residents with the best roads possible.”

Legislator Patrick Burke (7th District) added, “Improving the condition of George Urban Boulevard has been a priority of mine since entering office in 2014. The residents of Cheektowaga made it very clear that this road needed to be redone. Thank you Mark Poloncarz and the Erie County DPW for responding to my concerns and committing significant resources to this important project."

The Erie County Department of Public Works Highways’ Division worked closely with the Town of Cheektowaga Highway Department to ensure the Town could successfully complete their mill & overlay program prior to the County doing their work.  Additionally, the Town was allowed to “open cut” the road for sanitary sewer upgrades, resulting in a substantial cost savings for the Town. The contractor on this approximately $747,000 project was Amherst Paving Inc.

On the Erie County Department of Public Works, visit http://www2.erie.gov/dpw