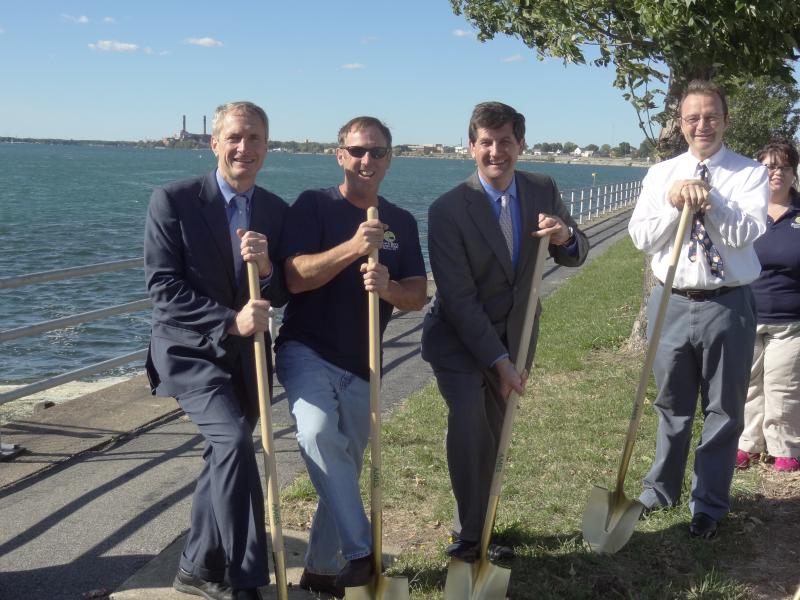 “Today we are standing at the crossroads of the past and the future, with the future looking better than ever for Black Rock Canal Park. This long-neglected site, always seen as a ‘jewel in the rough’ by the committed residents who have driven this revitalization forward, is now poised to become a waterfront jewel of the County Parks system,” said Poloncarz. “Many thanks go to the Black Rock Canal Park Steering Committee, who never lost sight of their goal, and to the numerous other agencies who joined with them in their dream to create a beautiful, modern waterfront park for all residents to enjoy.”

Black Rock Canal Park, formerly known as the Ontario Street Boat Launch and Cornelius Creek Park, was noted by the Black Rock Canal Park Steering Committee as an area needing improvements due to constant vandalism and an unsafe atmosphere after dark. The committee, a community group composed of concerned residents, worked closely with Erie County to raise funds needed to complete a feasibility study and master plan for the park improvements. The study and master plan were completed in 2010, and include a new look for the park with environmentally friendly, “green” features.

“I am so excited for this project and want to credit not only County Executive Mark Poloncarz for making it a priority, but also the exceptional work of the Black Rock Canal Park Steering Committee,” said Maria Whyte, Commissioner of the Erie County Department of Environment and Planning. “These community volunteers looked past the blight to recognize this park’s potential and then began working tirelessly over the last several years to engage partners, raise money, and advocate for change. Because of their hard work and vision, this park will now be the most environmentally friendly park in the County’s system and a waterfront jewel.”

“Dedicated volunteers, community support, assistance of elected officials and the cooperation of the                  Poloncarz administration have led us to this moment,” said Margaret Sczepaniec, Chair of the Black Rock Canal Park Steering Committee. “We look forward to continuing the great working relationships we have established as the Black Rock Canal park project progresses to the ultimate goal of completion.”

“We are excited at the upcoming changes here at Black Rock Canal Park and want to thank the Steering Committee, as well as the Department of Environment and Planning and other partners in government, for all the hard work they’ve done on this,” said Troy Schinzel, Commissioner of the Erie County Department of Parks and Recreation. “This park will be a beautiful addition to the County system.”

“Today is truly an exciting day for Black Rock residents and all of Buffalo,” said Assemblyman Sean Ryan. “After many years of waiting, the new Black Rock Canal Park is about to take shape. For far too long this area was neglected and underutilized, and now it will be transformed into an asset that the people of Buffalo can enjoy for decades to come. This project is the result of a community driven process, something to be very proud of. It is great to see that every level of government has stepped up to the plate to fund these renovations, and I would especially like to thank County Executive Poloncarz for making this park a priority.”

Legislator Lynn Marinelli (D-Buffalo, Tonawanda) added, “This project is such a win for the community. Green space will be added to a developed, urban neighborhood. Dog walkers will be able to take their ‘best friends’ to a unique dog park, while bicyclists, kayakers and bird watchers enjoy the park as well. In addition to the community volunteers who dreamed of a new park and recreational area for the residents of Black Rock and Riverside, I want to thank Erie County Executive Mark Poloncarz for his strong commitment to this project, as well as our partners in state and local government.”

The initial phase of work at Black Rock Canal Park is expected to be approximately 75% complete by the end of 2012, with the remaining work completed by Memorial Day 2013. Funding for the feasibility study, master plan, and this phase of construction amounts to approximately $1,000,000 and is being provided by the NYS Department of State – Environmental Protection Fund, NYS Department of Transportation, NYS Canal Corporation, Niagara River Greenway Commission, Erie County, and the City of Buffalo.