Poloncarz Sworn in for Second Term as Erie County Executive

END_OF_DOCUMENT_TOKEN_TO_BE_REPLACED 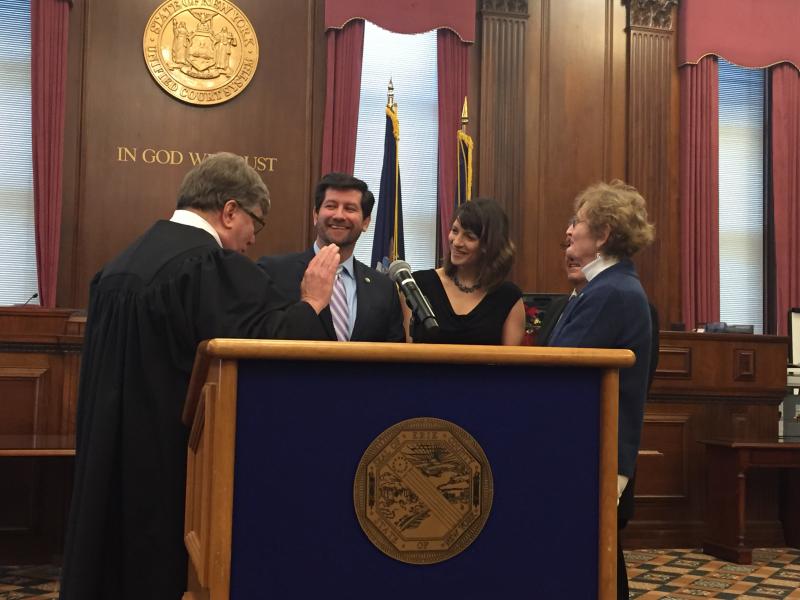 ERIE COUNTY, NY— Mark C. Poloncarz was sworn in today for his second four-year term as Erie County Executive at an event held in the Ceremonial Court House of Old Erie County Hall in the City of Buffalo.

Speaking to a crowd that included New York State Lieutenant Governor Kathleen C. Hochul, Congressman Brian Higgins and various elected officials from municipalities located throughout Erie County, Poloncarz celebrated the accomplishments his administration achieved during his first term in office while also providing a glimpse at some of his agenda items for his second term.

“Today is a day in which we reaffirm the progress we have made these past four years, but also starts a new chapter, a fresh page in our history to build the Erie County we all know it can be,” said Poloncarz. “While we are well on our way to reaching our destination, there is more work to do.”

The county executive, who was first elected in November 2011 and was re-elected this past November, spoke about the great positive changes that have taken place over the past four years and also stressed during his inauguration speech the need for county government to provide opportunities for all citizens in what he calls the ‘New Erie County.’

“The promise of America, the promise of our community, has always been that anyone, regardless of their skin color, sex, national origin, or other characteristic can succeed,” said Poloncarz. “This is why we must not let the glory of this promise ring hollow. We cannot let this incredible ‘New Erie County’ just benefit the select few. We can and will lift all boats as Erie County’s tide rises.”

Despite an impressive first term in office that included the establishment of new working relationships with various partners from the private sector and the county’s increased investment in parks, libraries, roads and bridges, and health services that improve the quality of life for county residents, Poloncarz stressed the need for Western New York to rededicate itself as a region to help create a better community for all.

“We have laid a strong foundation for a better, more vibrant community these past years, but now is not the time to rest,” said Poloncarz. “There are still people in need in our community and we cannot let them down. While accomplishing this is not easy, working together we will succeed because that is what a government is at its core: an embodiment of its people, the manifestation of our better angels, and the united will of all leading a community forward when others cannot or will not. Today we do more than celebrate a new term. We rededicate ourselves to the very idea of what our county, our community, can be.”

Poloncarz’s inauguration ceremony, which included opening remarks from Congressman Higgins, was presided over by Supreme Court Justice Dennis Ward, who officially swore in the county executive for his second term as Erie’s eighth county executive.

Poloncarz’s full inaugural address as prepared for delivery can be read by clicking on this link: