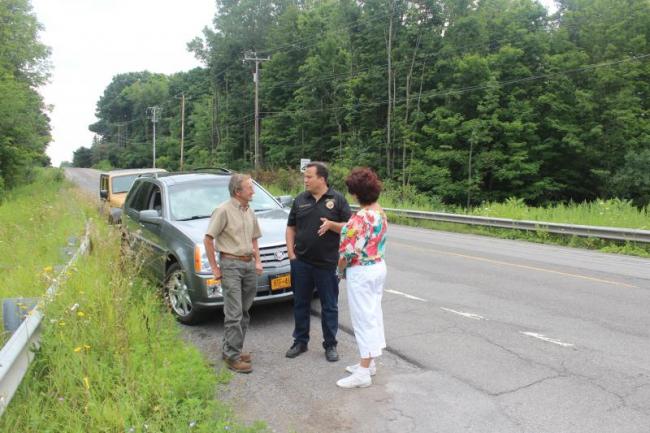 Erie County Comptroller Stefan I. Mychajliw Jr. accepted the invitation of Town of Marilla taxpayer Cyndee Stelmach to personally see the crumbling conditions of Erie County roads in and around their town.  Not only do numerous potholes litter sections of Town Line and Bullis Road, both Marilla Supervisor Earl “Skip” Gingerich, who joined the tour, and Stelmach believe the county is not going far enough this construction season to repair the entire length of Bullis Road.

“Milling and paving only a section of Bullis Road isn’t good enough.  We were told the entire stretch of Bullis, going all the way to Two Rod, won’t be fixed until next year.  That doesn’t make any sense.  If the county is working on a small section of Bullis this year, why not just go one more mile while equipment will already be on site?  Seems like a haphazard way of repairing county roads.  They’re a mess.  Families can’t walk on these rough roads, let alone drive on them,” said Stelmach. 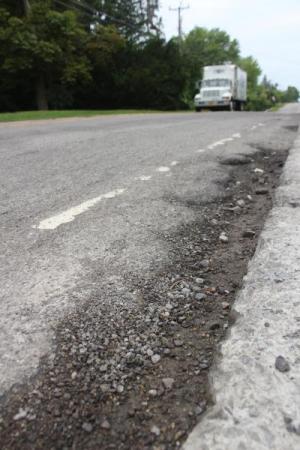 “Bullis is a major thoroughfare not just for Marilla taxpayers, but for folks driving in from Wyoming County and for people heading to the 400.  The county should extend repairs all the way to Two Rod as soon as possible.  The end of the road leading to Marilla Primary School and Marilla Free Library should be repaired now.  If part of the road is being worked on this year why not fix the rest now, especially with children headed back to school and to the library in the fall,” added Supervisor Gingerich.

Comptroller Mychajliw wrote a letter, as promised, to Erie County Public Works Commissioner William Geary about the crumbling conditions of deteriorating county roads in the Town of Marilla, and to share the sentiments of Supervisor Gingerich and Mrs. Stelmach.