Erie County Comptroller Stefan I. Mychajliw, Jr. is reporting to the Erie County Legislature that 2019 was another positive year for sales tax collections.  Thanks in part to this nation’s strong economy this past year, revenue generated from sales tax in 2019 was $11,631,159.08 over what was budgeted.

“It’s a positive sign that our economy is doing well and people are spending.  There’s a misconception that Canadian shoppers drive our sales tax revenues.  While our ‘Neighbors to the North’ do in fact give us a boost when they shop here, data shows border/bridge traffic is significantly down over the past few years.”

“The main driver of local sales tax revenue is the fact that families have more money due to the strength of the economy.  Taxpayers here at home are spending their hard-earned dollars, thanks to a roaring economy this past year.  That’s great news for the Erie County budget,” said Comptroller Mychajliw.

Erie County ended December $18,873,153 higher for 2019 as compared to 2018, bringing in more than $829 million in sales tax revenue, thanks to strong earnings in the summer months and a profitable holiday shopping season.

“When the economy is strong, it generates healthy sales tax revenue.  There’s a positive impact for every village, town and city in Erie County.  It is also a big boost to our local school districts,” added Comptroller Mychajliw. 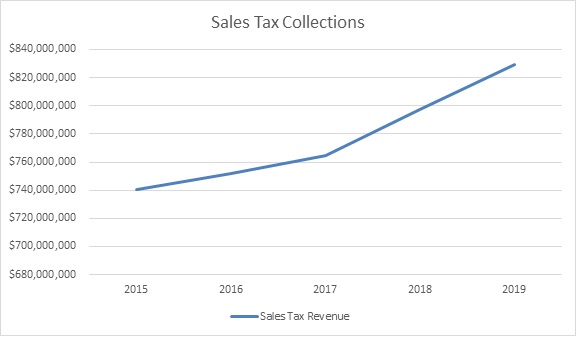 Here is a breakdown: 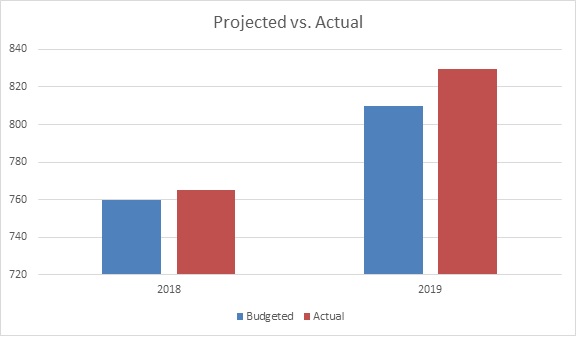 The anticipated revenue budgeted for the months of March and October, 2019 fell well short of projections.  But there was a significant positive variance in other months, resulting in sales tax collections being up $11.6 million over what was budgeted.

Furthermore, AIM-related payments (Aid and Incentives for Municipalities) will negatively impact sales tax revenues collected by Erie County going forward.  Those payments are a result of an amendment to New York State Tax Law, which requires a portion of county-imposed sales tax revenues to be withheld and distributed by the State Comptroller to certain towns and villages.   It does not change any prior sales tax agreement that is currently in place between the county and its municipalities.

The 2019-20 Enacted State budget amended the Tax Law to provide that a portion of county-imposed sales tax revenues be distributed this year, and every future year, to fund the gap in revenues resulting from the elimination of those AIM monies for local governments.  It directs the State Comptroller to withhold a portion of county sales tax revenues from each county in order to fund this gap in revenues, and then distribute those dollars to municipalities eliminated from the AIM Program.

Sales tax collections are slowing in almost every region in New York State.  While the New York State Comptroller speculates that declining gas prices is a likely reason for the slowdown, it also should be pointed out that since June, 2019 internet sales are also being taxed.  Those online businesses must collect taxes on behalf of the third-party sellers for which they coordinate the transactions.  That may have taken some of the sting out of lower tax collections from gasoline sales and likely accounts, in part, to revenue being higher than anticipated for 2019.

“While it’s a great sign that consumers are spending, we need to be mindful of the heavy burden placed on taxpayers.   With the state facing a $6 billion deficit, it’s likely state lawmakers will turn to local governments to help balance their books.  As it currently stands nearly every property tax dollar goes to pay the Medicaid bill.  As a result, Erie County relies heavily on sales tax revenue to fund many of the programs, services, and cultural organizations taxpayers expect.”

“It’s risky to rely so heavily on sales tax revenue to balance the budget.  Fortunately, this country has enjoyed an economic boon these past several years.  But we must also be mindful of what negative moves the state may make to close their big budget deficit, harming local governments like us in the process,” concluded Mychajliw.