Erie County Comptroller Stefan I. Mychajliw Jr. released a report examining declining enrollment at SUNY Erie (ECC) and the significant issues this could cause in the immediate future for the college. Taking a hard look at the numbers, Comptroller Mychajliw included figures from Gov. Cuomo’s Excelsior Scholarship program that is costing taxpayers millions of dollars and still failing to increase enrollment.

“ECC’s declining enrollment is troubling. Since 2010, enrollment has declined 30%. This is happening despite New York State handing out taxpayer-funded tuition. So the state spends more than $163 million of your tax dollars on a program that is failing miserably. At the same time, ECC’s solution has been to increase tuition year after year. Since 2010, while enrollment declines, tuition skyrocketed by 48.5%. This is a flawed formula.  Taxpayers are suffering greatly,” said Comptroller Mychajliw. 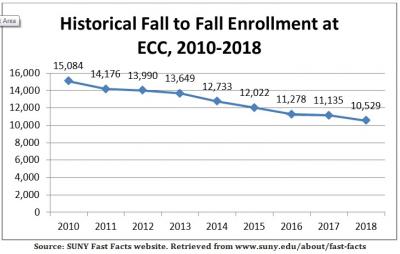 Between fall semester 2010 and fall semester 2018, total enrollment at ECC decreased by 4,555 students.  This represents a decrease of 30.2% over that time period. The decline in student population includes both full-time and part-time students.

Supporters of the taxpayer funded Excelsior Scholarship program hoped that it would be a solution to declining enrollment.   However, Comptroller Mychajliw’s report clearly shows that is not the case. According to a New York State fact sheet on the Excelsior Scholarship program, the total cost of the program is approximately $163 million. The report shows that the flawed program has resulted in upwards of 60% of applicants being denied. This has done little to bring students into NYS colleges.

ECC’s solution to losing revenue from lost enrollment has been to impose tuition increases on its students during the time period examined.  Tuition has increased from $3,300 in 2010 to $4,900 in 2018.  This represents an increase in tuition of almost 50%. 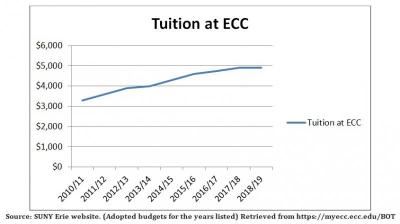 “With the conclusion of this report, I give ECC and Excelsior failing grades. We are seeing millions of tax dollars being wasted and no positive results. Enrollment is quickly declining. Tuition for the two-year school, once a well-respected trade/technical college, is increasing and out of reach for many students. The cost far exceeds the state average for tuition. ECC now is the most expensive Western New York community college and has the seventh highest community college tuition in New York State,” he noted.

“The very expensive, taxpayer subsidized Excelsior Scholarship program is not working. NYS has not realized an increase in enrollment nor students obtaining the college education that Gov. Cuomo promised them. ECC needs to make some major changes and quickly. It is clear to me that forcing students to pay more for less and flawed taxpayer funded handouts are not a solution,” Comptroller Mychajliw concluded.

The report was requested by the Erie County Legislature to examine enrollment trends as ECC prepares to finalize its budget, which the Legislature will vote on.

To view a copy of the report, please CLICK HERE.