COMPTROLLER MYCHAJLIW LEADS THE FIGHT FOR LAWSUIT REFORM IN NYS 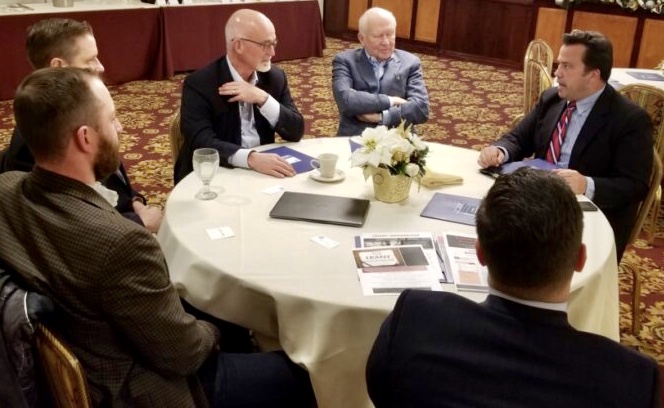 Erie County Comptroller Stefan I. Mychajliw, Jr. met with members of the Lawsuit Reform Alliance of New York (LRANY) to discuss the issue of frivolous lawsuits and skyrocketing legal costs across the state. These antiquated laws put businesses and property owners at risk, drive up the cost of construction projects, and lack common sense. Members of LRANY and Comptroller Mychajliw discussed specific laws that are long overdue for reform.

“New York State is a joke when it comes to backwards laws and regulations that hurt families.  In the end, taxpayers get socked in the pocketbook by ridiculous lawsuits.  No wonder why income generators are leaving New York in droves. Reform is sorely needed.”

“For example, a criminal that breaks into your home and is hurt can sue you for damages. That is nuts and just plain wrong.  How on earth can our state allow a lawbreaker the right to sue you if they are injured while breaking into your home?  I was happy to meet with the Lawsuit Reform Alliance of New York to address their concerns. However, what we need is for our state leaders to take action and approve reform once and for all. It begins with them,” said Comptroller Mychajliw.

The LRANY is a non-partisan, non-profit coalition focused on reducing the burden of lawsuits and litigation on our state economy. Laws they cite among their main concerns are trespasser responsibility, Scaffold Law, Americans with Disabilities Act (ADA) lawsuit abuse, and lack of transparency in asbestos trust claims. The group has proposed reforming several laws to address various issues.

Another major issue has been the “Scaffold Law.” New York is the only state in the nation to still enforce this harmful law. By doing so, New York State adds significant cost to all construction projects, including public projects such as the new STEM building at ECC North Campus, which was partly funded with county dollars. For large projects, the Scaffold Law can add millions of dollars to the bottom line.

Under the Scaffold Law, the property owner or contractor is held liable for any elevation related injury. Meaning if someone is standing or elevated from the ground and is injured while falling, regardless if their own negligence causes the fall, the owner or contractor is automatically liable and “in the wrong” for the fall.  The serious flaw with the law is the absolute liability standard. Even if someone is intoxicated or negligent and hurts themselves, the contractor or property owner is liable.

“Think about how screwed up New York State is.  If someone comes to work drunk and falls, the contractor or property owner, by law, is automatically at fault and is responsible for damages.  I give the hard working folks at LRANY a lot of credit.  They are crisscrossing New York, meeting with public officials and applying pressure in Albany to reform these ridiculous laws,” added Comptroller Mychajliw.

Comptroller Mychajliw, who reformed his office on day one with an overhaul of the county’s banking procedures, noted that reform protects taxpayers. Without changes to certain laws, taxpayers and businesses will continue to face excessive costs and be at risk of lawsuits.

“Reforms are important, whether it is legal reforms or changing the way the county conducts business in order to save taxpayers money.  The way the Comptroller’s Office handled banking before I was elected was a mess. We consolidated our banking needs into one bank. Working with M&T has saved taxpayers’ money and streamlined how we do business. This was priority number one.”

“Now we need state law makers to have the same approach to getting rid of these outdated laws that hurt taxpayers. New York is losing population at an alarming rate.  People don’t want to do business here.  The only way to stop the population bleeding is to implement smart and fair reforms that protect taxpayers and don’t harm businesses.  It’s time Albany wakes up, reviews the issues LRANY raises and finally implements lawsuit reform in New York State,” concluded Comptroller Mychajliw.