Full video of morning skate, shoot around and full scrimmage from Sunday, December 27th, contradicts public statements made by the Erie County Executive

“I’m thrilled we can begin the discussion on letting kids play hockey, the same way Erie County Executive Mark C. Poloncarz and his ‘mates’ do. I think it’s wonderful Mark Poloncarz plays hockey, shoots the puck around, while his friends engage in scrimmages. Kids and youth leagues should be able to do the same. My issue: political hypocrisy. Rules for thee, but not for me. Holiday Twin Rinks gets shut down by the Erie County Executive’s Health Department for hosting scrimmages, but other rinks are not penalized for doing the same. All rinks should be open. All kids should be allowed to play.

Mark Poloncarz did not tell the truth. Video downloaded by Live Barn video service from the Northtown Center at Amherst from the morning of December 27th, 2020 shows he’s on the ice with at least four and as many as 14 other hockey players. Mark Poloncarz did not skate and shoot by himself as he stated on Twitter.

That being said, rules should be consistent for all businesses and hockey rinks. According to New York State's "Reopening New York Sports and Recreation Guidelines" effective July 6th, 2020, Ice Hockey is listed as a "Higher Risk Sport." Competitive Team practices, games, meets, matches, scrimmages are banned.

The Erie County Department of Health was quick to shut down Holiday Twin Rinks. Yet friends of Mark Poloncarz are allowed to skate and scrimmage.  Erie County and New York State should open up ice rinks and let kids play hockey.  The discussion is far bigger than Mark Poloncarz denying being on the ice and a scrimmage taking place.  Let kids play. Now. Open up hockey leagues again. If the County Executive and his friends are allowed to play, so too should kids across Erie County and New York State.” 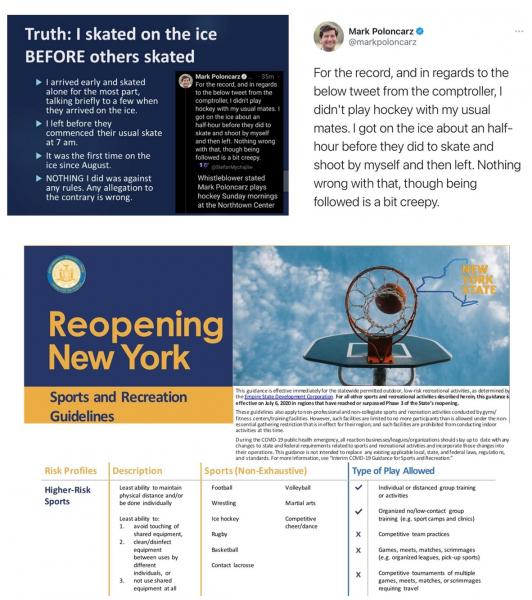 For a PDF of the press release, please CLICK HERE