Steep enrollment declines could affect New York State funding to the community college, which in turn could negatively impact the Erie County budget

The Office of Erie County Comptroller also put the Erie County Legislature on notice, that potential fiscal issues related to the community college could negatively impact the Erie County budget.  The near depletion of SUNY Erie’s fund balance, its “rainy day fund,” could further lead to strain on Erie County’s budget if in fact the college turns to the Legislature for economic relief.

“While the drop in enrollment is troubling, more alarming is the potential financial issues down the road that could impact the county budget,” said Comptroller Mychajliw.  “State funding for ECC is based on student population.   When enrollment numbers decrease this much, the college could experience a cut in state funding.  I’m also putting the Legislature on notice.  Any fiscal issues ECC faces could potentially negatively impact the Erie County budget.”

Data that was collected compared ECC’s student enrollment for every fall semester from the Fall of 2010 to the Fall of 2019.  Enrollment has also declined at other higher education institutions across New York State, but more significantly at community colleges.  In fact, statewide community colleges outside of Western New York saw a decline in population of 19.5%.  City University of New York schools (CUNY) are also publicly funded.  During that same time period, their enrollment went down 0.5% declines, but not as significant as ECC.

“In ECC’s defense, public colleges across New York State are also experiencing deep declines in enrollment.  That being said, the drop at ECC and other Western New York schools is higher by comparison,” said Comptroller Mychajliw.  “ECC leadership had planned for annual increases in enrollment.  Data shows that is not happening.  The Erie County Legislature needs to be prepared to address enrollment and fiscal issues that could impact our budget.”

Erie Community College planned for 1.75% annual enrollment growth beginning in 2017-18.   But instead of the planned 7.2% student enrollment increase from 2016 to 2019, ECC experienced an 11% enrollment decrease.

Using that data, the chart below depicts the declining enrollment at ECC: 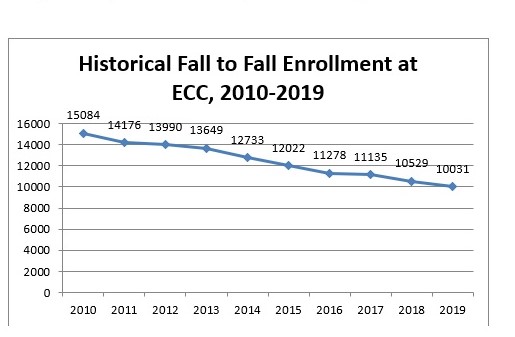 New York State aid to Erie Community College is nearly $300,000 less over that same nine-year period, while the Erie County Legislature has increased funding to ECC by more than $1 million, despite enrollment declines.  Tuition has also increased 48.5%, making an ECC education higher than the state’s average community college tuition.

ECC provided 5-year projections in the school’s 2019-2020 budget.  That forecast included flat or slight enrollment increases; a 3% tuition increase for the coming school year, with 2% increases the following two years, and state funding remaining the same through 2023.

But since their five-year plan was released, student population declined.  Even if those numbers remain flat for the next three years, and given all other factors hold true, projections will still not meet expectations.

Another funding source to help address shortfalls is fund balance.  The projected fund balance for academic year 2018-2019 was $15.46 million.  From that, the college anticipated spending $9.3 million through academic year 2022-2023.  But given present circumstances, that would leave ECC with just a 5.5% fund balance, significantly less than the 16% recommended by the Government Finance Officers Association.

Additionally, New York State no longer guarantees funding at a certain level for community colleges regardless of enrollment.   With student population down significantly, it stands to reason state funding could also decrease.

“With enrollment down and tuition up, the Erie County Legislature needs to prepare to deal with these two very important issues, said Comptroller Mychajliw.

“The college may not receive the state dollars they’ve come to expect.  They’re using fund balance to fill fiscal gaps.  This means ECC could turn to the Erie County Legislature to fill budget holes.  Legislators need to have serious discussions about the future of the school and what changes need to be made.  Those enrollment and financial numbers are not sustainable long-term and cannot be ignored,” concluded Comptroller Mychajliw.