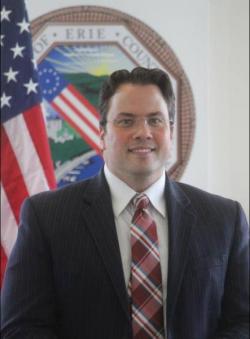 To put things in fiscal perspective, the $50.4 million Erie County paid ECMCC to cover its losses providing health care to the uninsured is tens of millions of dollars more than what the county pays for important services like libraries, Erie Community College, road repairs, parks, Sheriff’s Road Patrol, Youth Services, Senior Services and all of our cultural institutions.

If the federal government did not force Erie County to cover huge financial losses at ECMCC for the uninsured, property taxes could be cut 12 percent for homeowners.

“This crushing federal mandate under Obamacare is unfair to taxpayers.  It decimates the Erie County budget.  Hard working taxpayers suffer enough living in one of the highest taxed regions in the country.  This unfunded mandate from the federal government is a slap in the face to Erie County homeowners.  Families struggle to pay their bills, including mounting health care costs.  They’re getting screwed twice over in Erie County.  People pay their own health care costs, then again for the uninsured to get care at ECMCC,” said Erie County Comptroller Stefan I. Mychajliw Jr.

More alarming is the skyrocketing IGT payments Erie County has been responsible for over the past five years.  Going back to 2012, Erie County taxpayers paid approximately $18.8 million to cover losses at ECMCC for people without health insurance receiving health care there.  That is an increase of $31.6 million compared to the $50.4 million that was paid in 2017.

“Every year, the federal government forces Erie County to make this payment.  We have no choice.  I believe every penny should be returned to taxpayers in the form of a property tax cut.  This unfunded federal mandate is a massive drain on our budget,” added Comptroller Mychajliw.

Erie County Pays for Losses Covering the Uninsured at ECMCC

To better understand how large of a negative impact this unfunded federal mandate is on the Erie County budget, the $50.4 million paid to ECMCC in 2017 (the most recent audited year) pales in comparison to what is proposed to be spent on critically important services in the 2019 Erie County budget, including:

In all actuality, the staggering loss providing health care to the uninsured at ECMCC in 2017 totaled $100.8 million.  Under the law of Obamacare, Erie County covers half the loss and paid the hospital $50.4 million, while the federal government covered the other half of the loss, $50.4 million as well.

“Erie County is stuck.  We are in a terrible spot.  By law we have to pay this bill.  We do not have a choice.  It is the law.  The federal government could eliminate IGT payments.  This would force ECMCC to cover its own losses providing health care for the uninsured.  Then the worst case scenario could occur.  ECMCC could declare insolvency and hand the keys to the hospital back to Erie County.  Then Erie County would once again be responsible for operating a hospital that loses a boatload of money.  It would go from ‘bad to worse’ for taxpayers,” concluded Comptroller Mychajliw.

For a PDF of the report, please CLICK HERE.