3/3/14: Poloncarz Honors Helen Silvia as March Senior of the Month

ERIE COUNTY, NY— Today, Erie County Executive Mark C. Poloncarz was joined by Senior Service Commissioner Randy Hoak and members of the Department staff, as well as residents, staff, and well-wishers at the Garden Gate health care facility on Union Road in Cheektowaga to honor Mrs. Helen Silvia as Erie County’s “Senior of the Month” for March and also to join in the celebration as Mrs. Silvia enjoyed her 107th birthday. Mrs. Silvia was presented with a bouquet of blue roses (her favorite color) and a sapphire necklace, along with a birthday cake and a rousing rendition of “Happy Birthday” sung by all in attendance. 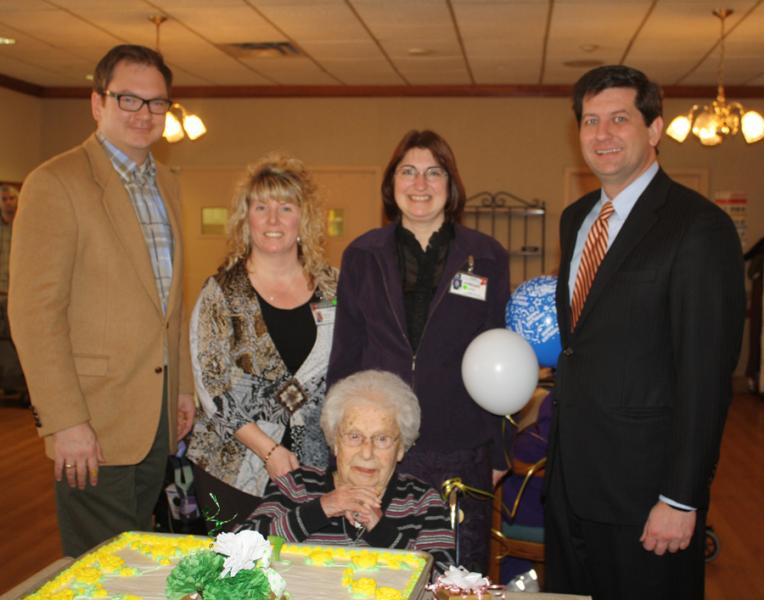 “I am honored to be here today to recognize Helen Silvia as Erie County’s ‘Senior of the Month’ for March and also to join in her birthday celebration,” said Poloncarz. “Her wealth of life experience, positive attitude, and cheerful demeanor are an inspiration and a blessing to those around her.  It is also extra-special to present this proclamation on her birthday, and on behalf of Erie County I wish her the best birthday and a great year ahead.”

Mrs. Silvia was born Helen DeCarlo on March 3, 1907 in Hyde Park, Massachusetts. In 1907, Theodore Roosevelt was President of the United States; the U.S. Congress voted to raise their pay to $7,500 a year; the Chicago Cubs beat the Detroit Tigers in the 4th World Series; and Oklahoma became the 46th state in the United States.  Helen married Bert Silvia in 1934 while working for SWANK jewelry, a manufacturer of fine men’s jewelry and accessories; Mr. and Mrs. Silvia both worked for SWANK for over 50 years. While living in Massachusetts, Helen was a longtime and active member of the Daughters of Isabella, the women’s auxiliary of the Knights of Columbus. In her spare time, Helen enjoyed crocheting, bowling and playing BINGO. Mrs. Silvia moved to Erie County in 1989 to be with family after the passing of her husband Bert, and moved in to the Garden Gate residence in 2008.