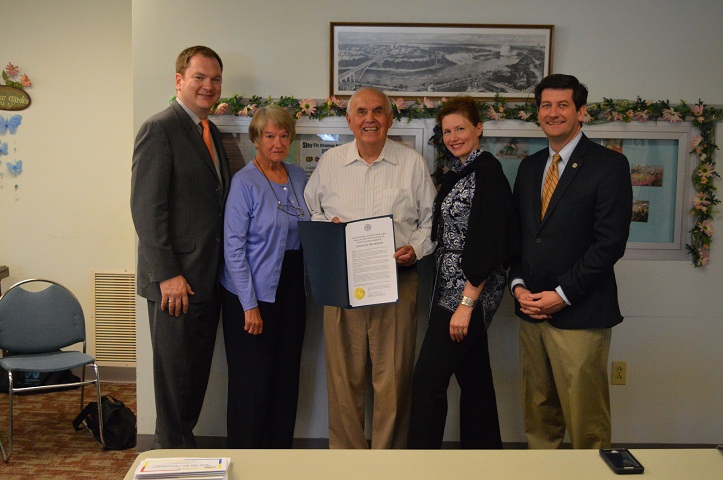 ERIE COUNTY, NY— Today, Erie County Executive Mark C. Poloncarz was joined by Commissioner of Senior Services Randy Hoak and enthusiastic seniors at the Orchard Park Senior Center on Linwood Avenue to honor Alan Winistorfer as “Senior of the Month” for April 2015. Mr. Winistorfer serves Orchard Park as a volunteer for Meals on Wheels, but brings far more than just meals to seniors in the Town.

During the winter storm in November 2014, he was delivering meals to a home in Orchard Park and discovered former Senior Services Advisory Board member Richard Szczepanski laying in a snow bank at the side of the driveway. A good Samaritan himself, Mr. Szczepanski had been clearing the driveway as a favor to a homebound friend when he lost his balance, slipped into the snowbank and was unable to get up. Mr. Winistorfer immediately called 9-1-1 and help arrived in a matter of minutes; Mr. Szczepanski’s vital signs indicated that the rescue was just in time. Mr. Winistorfer found himself in a similar situation earlier in 2014 while delivering meals; in that incident, he opened an unlocked door after there was no response from the Meals on Wheels client he was coming to visit and found her sitting in a chair gasping for breath. Alan immediately called 9-1-1, a call that saved the woman’s life.

“Mr. Winistorfer goes above and beyond the call of duty in volunteer service to his community, and has twice been in a position to offer critical, life-saving assistance to seniors in need,” said Erie County Executive Mark C. Poloncarz. “The meals and friendship he regularly brings as a volunteer for Meals on Wheels have a tremendously positive impact on the seniors he visits, and in 2014 his volunteer efforts twice put him in place to save the life of a senior in distress. Things may well have turned out differently in these two instances had Mr. Winistorfer not been there, so on behalf of all residents it is an honor to name him ‘Senior of the Month’ for April 2015.”

Commissioner Hoak added, “Erie County’s seniors are active, engaged, and giving back to their communities in numerous ways. Mr. Winistorfer has made a huge difference in his community, not only by providing the companionship and nutrition that come with being a Meals on Wheels volunteer, but by acting quickly and decisively on two separate occasions when seniors needed medical help. It is an honor to recognize and celebrate his volunteerism and compassion for our seniors.”

A former manager with Bethlehem Steel in Lackawanna prior to the plant’s 1982 closing, Mr. Winistorfer also held a managerial position with General Electric. He and his wife Marjorie have three daughters and have been residents of Orchard Park since 1965.